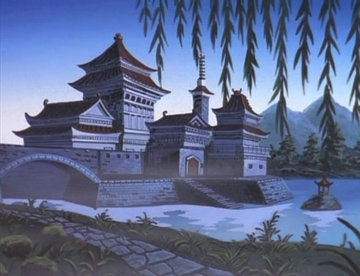 The Temple Of Ishimura.

Ishimura is a town in Japan, where a clan of gargoyles lives peacefully alongside humans.

Ishimura is probably a very ancient village. When peace came to Japan following the feudal period, the tengu ancestors of the Ishimura Clan settled in Ishimura to teach Bushido. The clan resides in a large temple near the village where most of the townspeople live. While the village still experiences threats both inside and outside its walls, peace is more or less a constant and the Ishimura Clan remains (as Kai claims), "the best kept secret in Japan."

Taro bought a large piece of land east of Ishimura and there built his Gargoyle Theme Park. ("Bushido")

In late 1996, Vinnie Grigori arrived in Tokyo and attempted to find his way to Ishimura. ("The Lost")