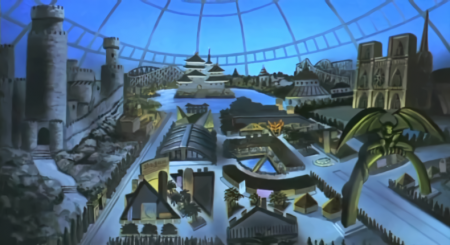 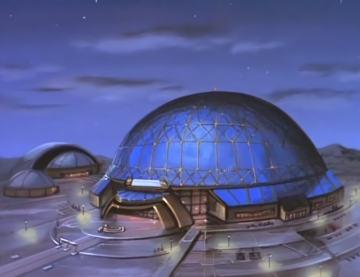 The Gargoyle Theme Park was an entertainment environment built by Taro to feature living gargoyles.

Taro built the Theme Park in Japan, presumably somewhere near the village of Ishimura. The entire park was housed beneath an enormous dome. The Theme Park included replicas of the gargoyles' home in Ishimura, Notre Dame Cathedral (famous for its architectural gargoyles) and Edinburgh Castle. It also featured at least one rollar coaster and a huge animatronic talking gargoyle that greets guests by saying, "Welcome, my friends, to the home of the noble gargoyles."

For a family theme park, it also possessed a surprising amount of high-tech security including an airlock-like entrance that could be filled with a knockout gas, a prison cell and several large guns. These features seemed to be added to control any unhappy gargoyles.

Taro transported the entire Ishimura Clan (as well as Goliath, Angela and Bronx who were visiting Ishimura on the Avalon World Tour) into the park while they slept. Upon waking they were shocked and after touring the park decided to return to Ishimura. Taro, naturally, did not want to allow this, but with help from Hiroshi and Elisa all the gargoyles were able to escape.

When a group of reporters arrived the next morning, Taro was humiliated. What happened to the park after that is unknown, though it was likely an economic failure. ("Bushido") The park may have been run on a limited liability partnership, enabling Taro to minimize his losses. [1] 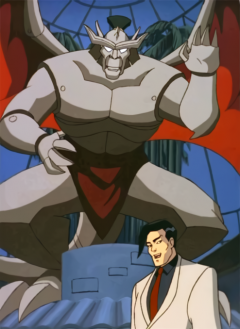 The animatronic gargoyle and Taro
Retrieved from "https://www.gargwiki.net/index.php?title=Gargoyle_Theme_Park&oldid=32417"
Category: