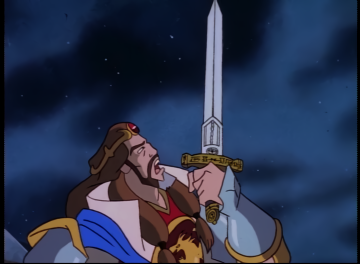 Excalibur is the magical sword of King Arthur.

It originally came from the Lady of the Lake; the young Arthur drew Excalibur out of the Stone of Destiny in order to become King of Britain. He thereafter bore it until his final battle, when it was returned to the Lady.

The Lady of the Lake probably kept Excalibur afterwards until at some unspecified point, presumably in the late 20th century, the sword was transferred to the heart of a stone dragon mounted in the center of the maze in Brooklyn Botanical Gardens. When King Arthur and Griff were brought to New York City by the Stone of Destiny, they undertook a quest for Excalibur, guided by a riddle about the sword that Griff had learned as a hatchling and by the words of the Lady of the Lake, and also assisted by the trio and Hudson. However, Macbeth learned of their quest, and decided to seize Excalibur for himself. The two former kings vied for the sword, Macbeth finally reaching the stone dragon first, and drawing a sword that he believed was Excalibur out of the statue. However, the dragon then came to life by magic, to battle Arthur and Macbeth; in the combat that followed, Arthur discovered that the sword which Macbeth had withdrawn was only a counterfeit and destroyed it; he then interpreted Griff's riddle to see that Excalibur was hidden within the dragon, shattered the stone beast with his mace, and regained his sword. He now bears it as he and Griff quest for Merlin. ("Pendragon")

Excalibur's powers are as yet unknown, although presumably it is an object made by faerie magic. It is undoubtedly a very well-made sword, at the least.

Excalibur has been consistently linked to King Arthur since the early Welsh legends, where it is called Caledfwlch and named as his sword. It is thought to be somehow linked to the sword Caladbolg, which appears in Irish legend. Geoffrey of Monmouth named it Caliburn, and described it as having been forged on the Isle of Avalon. Later romancers, such as Robert de Boron and the authors of the Vulgate and Post-Vulgate Cycles, added in other familiar elements to it, such as the Sword in the Stone, the Lady in the Lake, and the arm clad in white samite. Sir Thomas Malory gave the story its present form in his Le Morte d'Arthur, written in 1470.

Unlike in Gargoyles, Malory makes Excalibur a separate sword from the Sword in the Stone. The earlier French writers, however, such as Robert de Boron (who first introduced the Sword in the Stone into the Arthurian legend), made them the same sword, and the identification still persists in the popular imagination to this day.

According to Malory, King Arthur broke his first sword while fighting King Pellinor, and Merlin brought him to the Lake of Avalon, to receive Excalibur from the Lady of the Lake. Excalibur rose from the middle of the lake, clasped by an arm clad in a sleeve of white samite. Arthur rowed across the lake in a small boat, and took up the sword from the arm. He kept it thereafter, until his final battle.

With Excalibur came a magical scabbard, which according to Merlin was worth ten Excaliburs; it prevented its bearer's wounds from bleeding. However, Morgana le Fay, Arthur's evil half-sister, wished to bring about the king's death, and therefore stole both Excalibur and its scabbard, replacing them with non-magical counterfeits. She then tricked Arthur into fighting Sir Accolon of Gaul, a knight whom she had suborned to her cause, Arthur being armed with the false Excalibur and Accolon with the true one. Accolon almost succeeded in slaying Arthur with his own sword; however, the enchantress Nimue intervened in the nick of time, magically sending Excalibur flying from Accolon's hand, so that Arthur was able to pick it up and slay him with it. (This incident may explain how it was that Arthur recognized the false Excalibur in Brooklyn Botanical Gardens for what it was; it is highly unlikely that he would be deceived by the same scheme twice.) Morgan le Fay managed to steal the scabbard again shortly afterwards, and threw it into a lake from which it was never recovered.

After Arthur's final battle, he told Sir Bedivere, his last surviving knight, to throw Excalibur into a nearby lake. Bedivere twice refused, but the third time, finally obeyed his king. The arm clad in white samite appeared from the depths of the lake, caught the sword in mid-air, and sank with it below the waves. The Lady of the Lake had taken back Excalibur, presumably to keep until Arthur’s return. According to some writers, however, a different knight than Bedivere (such as Sir Girflet in the Vulgate Cycle) returned the sword.