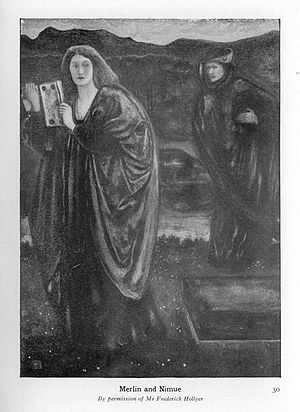 She is (apparently) the biological daughter of Duke Gorlois of Cornwall and his wife Igraine, but was stolen from her cradle as a baby, with the young Morgana left in her place as a changeling. Nimue was then presumably raised on Avalon and learned how to become a magic user; she also is responsible for Merlin's current imprisonment in the Crystal Cave. [2] Nimue was one of the three women who took the wounded Arthur away to Avalon following the Battle of Camlann, alongside the Lady of the Lake and Morgana le Fay. [3]

In the Arthurian legends, Nimue's most prominent role is that of the woman who magically imprisoned Merlin. According to Malory, Merlin fell in love with her, and in an effort to win her favor, began teaching her his magic. Nimue had no similar fondness for Merlin, and merely desired to be rid of his unwelcome attention. So she tricked him into teaching her a powerful imprisonment spell, and then used it to trap him for all time in a cave in Cornwall.

Afterwards, maybe in order to make amends to Arthur for depriving him of his magical advisor and guardian, she came to his aid on a number of occasions, twice foiling assassination attempts of Morgana le Fay's, once (with the help of Sir Tristram) rescuing Arthur from the evil sorceress Annowre, and once clearing Queen Guinevere of a poisoning charge made against her (coming, admittedly, after Sir Lancelot had already defeated Guinevere's accuser, Sir Mador de la Porte, in a "trial-by-combat"). She was also in the boat that came to take Arthur away to Avalon, after his final battle.

Medieval and modern versions of the Merlin legend give Nimue various other motives for imprisoning Merlin. The French Vulgate Cycle, which calls her Viviane and combines her with the Lady of the Lake, portrays her as being genuinely in love with Merlin and confining him within an invisible tower in the forest of Broceliande in Brittany, where she could have him all to herself (disliking the fact that he often left her side to aid and advise King Arthur). Alfred Lord Tennyson portrayed her in his Idylls of the King, under the name of Vivien, as evil, deliberately imprisoning Merlin so as to deprive Arthur of his aid, and some other modern-day writers, such as Howard Pyle, have followed this interpretation. Still others, such as Mary Stewart, have portrayed her as gently retiring a wornout Merlin, whose powers have begun to fade. Which interpretation is correct in the Gargoyles Universe, we as yet do not know.