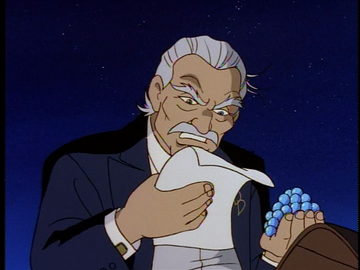 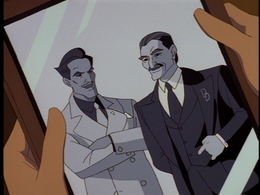 Mace Malone and Dominic Dracon in the 1920's.

Dominic Dracon is Tony Dracon's grandfather, and, like him, an infamous New York mobster. Dominic Dracon has also been known as D.D., and has used the alias G.F. Benton.

Born in 1902, Dominic Dracon and Mace Malone were partners in the 1920s, until Malone's disappearance. [1] Since Malone disappeared with the diamonds that he and Dominic had recently stolen, without sharing them first, Dominic began to search diligently for both Mace Malone and the diamonds, even moving into Malone's old office at 3150 3rd Avenue, 45D, to locate some possible clues, under the alias of "G.F. Benton", a CPA. He discovered from a letter of Malone's a clue that the jewels were located within a "silver falcon", and assumed this to be the Silver Falcon night club that Malone had once operated; he therefore tore the club down hoping to find them, but failed. Decades later, his grandson Tony searched for the diamonds in the foundation. In the end, however, Elisa Maza revealed to the Dracons that the "silver falcon" was actually one of the sculptures atop the Apex Tower. [2] To Dominic's disappointment, however, the falcon in question contained merely a briefcase with some marbles and a mocking note from Malone. Absolutely crushed, he was easily arrested by Elisa along with his grandson. ("The Silver Falcon") The utter shock of discovering what had really been concealed in the "silver falcon", and the destruction of his seventy-year-old hopes, was too much for him, decimating his sanity (at least according to his lawyer); he is now immured in Bellevue. [3]

After the events of "The Silver Falcon", Dominic Dracon, devastated over the fruitless outcome of his seventy-year-hunt for the stolen jewels, was sent to Ravencroft. There, Demona recruited him and a few of the other inmates to recover the head of the Spear of Destiny for her. He died following her defeat.