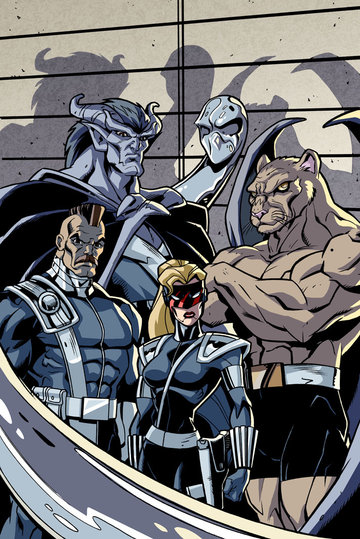 "Losers" is the sixth issue of the Gargoyles: Bad Guys comic by SLG, and Chapter six of the Redemption story arc.

As of August 31, 2008, SLG's license to produce single issues of the Gargoyles: Bad Guys comic has ended. The material that would have made up issues five and six is included in the trade paperback collection, Gargoyles: Bad Guys - Redemption, as "bonus material".

In the final battle against the forces of the Illuminati, each member of the squad will have to decide just whose side they are on. Is redemption even possible for the bad guys? And if so, at what cost?

We get our first look at the Director, Hunter's mysterious supervisor and the man behind the Redemption Squad. He had apparently founded the team to battle the Illuminati (Hunter claims that the Director works for Interpol, but judging from Falstaff's skepticism, she is probably not telling the truth). His own higher-up, known only as "Monsieur Le Maire" (probably a title or code name rather than a real name; it's French for "Mr. Mayor"), expresses his concerns to the Director about the advisability of the plan, seeing it as straying too close to the Illuminati's "ends-justifying-the-means" tone. Yet he agrees to let the project continue, as long as the Redemption Squad "do not become that which we fight against".

It seems at first as if Monsieur Le Maire's fear might be fulfilled, for Falstaff invites the Redemption Squad to join the Illuminati rather than to battle it, arguing that the Society wants to save the world, rather than to conquer it; he even describes it as "the good guys", in a delightful echo of the series' title. Since "Rock of Ages" had hinted that the Illuminati's goal (at least, from Peredur's perspective) was to prepare for King Arthur Pendragon's eventual return in Britain's (and maybe Earth's) great hour of need, this might be more than just the familiar case of the villain thinking himself the hero - though a close look at the Illuminati's actions throughout Gargoyles and Bad Guys shows that, even though their objective is noble, they have indeed succumbed to the philosophy of the ends justifying the means that Monsieur Le Maire dislikes.

Eager to convince the Squad of the Illuminati's intentions, Falstaff has them introduced to two of his colleagues by videophone - Fiona Canmore for Hunter (who tells her great-niece that the Canmores' "Hunt is but a vignette in a much larger tapestry") and Thailog for Fang. Falstaff makes his big mistake in choosing Thailog as one of the Illuminati's vouchers, for Fang, recognizing him from "The Reckoning" and knowing what the scheming clone is like, describes Thailog as his kind of gargoyle - which he knows will immediately put his team-mates, aware of his own unsavory habits, on their guard against the Society!

The Redemption Squad (cloaked from Falstaff's surveillance technology during their private conference thanks to Matrix) make up their mind to stay loyal to their mission rather than to switch sides. During their council, Dingo has another of his great moments when he opposes the proposed destruction of Falstaff's base: the Illuminati have used it to store their treasure, including a wealth of historical artifacts and artwork from all ages and around the world, and Dingo (echoing Hudson and Broadway at the climax of "A Lighthouse in the Sea of Time") doesn't want to see these cultural riches destroyed.

In the ensuing battle, the Redemption Squad (thanks in particular to some quick thinking by Fang) defeat most of Falstaff's operatives - but Falstaff escapes with the treasure, leaving the Redemption Squad in the middle of the ocean, on board Matrix in his boat-shape, with their only success being the capture of Mistress Quickly, one of Falstaff's agents. While it seems as if they've lost, Yama points out, in a grand closing speech, that the outcome of the external battle was less important than their quest for redemption, describing it as a difficult but necessary journey. Compared to this, Falstaff's escape seems almost irrelevant. It's a great moment, but Greg leavens it with humor, such as Yama's amusement (a rare moment for him) at Matrix's single-minded pursuit of law and order in contrast to his team-mates' goals, and Fang's exasperation when Yama turns to stone as the sun rises in the middle of his speech.

And so ends Bad Guys: Redemption. As I said at the beginning of this review, I had expected this to be my least favorite spin-off from Gargoyles, but was pleasantly surprised at it. We had not only some fine action sequences, but, more important, vivid characterization, mingled with some humor - and in the final two chapters, a fresh touch of Shakespeare, this time drawing from the history plays for the first time. I'm glad that I tried it, and recommend this series to all Gargoyles fans.

Fiona Canmore was originally created for "The Last", a never-made episode of the never-made series Team Atlantis that would have had the series' protagonists become involved in a confrontation between Fiona and Demona in Paris in the year 1920. Greg Weisman displays his usual "never waste anything" philosophy in incorporating her into Gargoyles canon in this chapter.

At the bottom of the final page, Greg Weisman dedicates Bad Guys to the memory of the late Gary Sperling, writing Gary's name in the Gargoyles font.