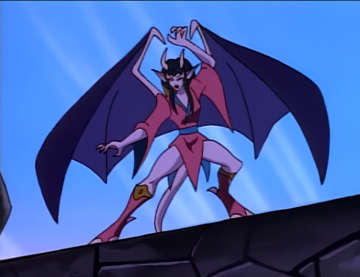 Sora is a gargoyle member of the Ishimura Clan.

Sora was hatched in 1958 in the rookery of Ishimura. [1] At some point she chose Yama as her mate. Yama is a rookery generation older than her, so their love is somewhat uncommon. [2] In 1996, Sora and the rest of the clan were kidnapped by Taro in their stone sleep and moved to a "Gargoyle Theme Park" to be revealed to the world. Though Sora found the park an interesting place to visit, she, like the majority of the clan, had no desire to live there. It was later discovered that Yama had assisted Taro and betrayed the clan. ("Bushido") After the clan's escape, it was decided that Yama would be banished until such time as his lost honor could be restored. Sora felt great pain at this decision, even telling Yama she was willing to join him, but Yama refused and the couple was forced to separate. Sora remained in Ishimura while Yama made his way to Tokyo. It is unclear how their relationship will progress. Gargoyles generally mate for life though, so it can be assumed that the pair will reunite eventually. ("The Lost") [3]

After Yama was banished from the clan, it is likely that she became Kai's second-in-command. [4] Assuming she is still alive, Sora is expected to lay her first egg in 2008. [5]

Sora, like most of the Ishimura Clan has black hair and two sets of horns, a shorter set of brow horns and a longer set on the forehead. She also has a forked tail. Perhaps her most unusual physical feature is her reduction of digits. Her wings seem to lack the ribbing typical in gargoyle wings and she only has two toes on each foot, as opposed to the typical three.