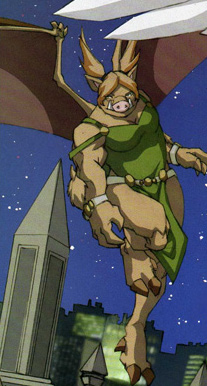 Constance, known to her friends as Coco, is a female gargoyle of the London Clan. She is also the second-in-command to the clan's leader Una, running things at Knight's Spur. [1][2]

Constance and her rookery siblings, including Staghart, hatched at Knight's Spur in 1958. [3]

In late 1996, she and Staghart accompanied King Arthur Pendragon and Sir Griff to Westminster Abbey in London to stand vigil over the Stone of Destiny. There they encountered and befriended Hudson and Lexington. Several days later they were attacked by Coldsteel, Coyote 5.0, and Steel Clan and Iron Clan robots. Constance literally disarmed the Steel Clan robot while performing an impressive mid-air maneuver. ("Rock & Roll")

Constance strongly resembles a wild boar. She's light tan in color and has a pig-like snout and two large tusks protruding out from her lower lip. She has reddish/orange hair which she wears in pigtails, and patches of fur of the same color on her forearms. Her feet resemble those of a boar, and she either possesses a very short tail or none at all. She's the first gargoyle of the London Clan seen who doesn't have feathered wings. Her wings instead resemble Brooklyn's hang glider-like type with three taloned finger claws at the top.

Constance and Staghart are best friends. Constance seems to be very strong and agile despite her large size. She seems to be a very strong-minded yet fun individual who takes pride in her fighting skill considering she scoffs at the advice of using a weapon.

Constance's nickname, Coco, originated in the early comedy development of Gargoyles as a sweet, heavy-set female character with a love of food and dancing. After a change of gender, the character was eventually developed into Broadway.

While writing for the comic book, Greg Weisman mentally casts new characters so he can hear a voice. He has mentioned that he vaguely had Zoë Wanamaker in mind for Constance. [4]