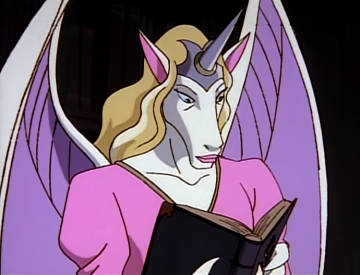 Una was hatched in the rookery of Knight's Spur in 1898. [2] With her rookery siblings, she was probably taught the Excalibur Poem by her elders. [3] At some point before 1940, she was one of the gargoyles who volunteered or was chosen to work at Into the Mystic, the clan's shop in Soho, along with her rookery siblings Griff and Leo. Una and Griff developed some romantic feelings towards each other in their youth, though they had not become committed mates yet.

At the beginning of World War II, during the Battle of Britain, Griff felt it his duty to help defend London from the Nazis, but Leo and Una viewed the war as a "human problem", and chose to simply continue running the shop and let the humans fight the war. When Goliath arrived in 1940 via the Phoenix Gate, he chose to join with Griff, and accompanied him on his last engagement in the Battle of Britain, before both vanished (due to Goliath's taking Griff forward in time to 1996).

After Griff and Goliath never returned home to the shop, Leo and Una believed that they had been killed in the fighting. In their mourning, they helped to finance and build a memorial to the fallen heroes of the Battle of Britain near the Thames River. [4] Over the next fifty-six years, Una and the rest of the clan slowly lost the Gargoyle Way. They continued to view the shop and their rural estate as their protectorate, but they turned a blind eye to the street crime in their neighborhood, which they viewed as somebody else's problem. Also during this time Una became the leader of her clan and at some point also learned how to use magic. Linked by their grief over Griff's loss, Leo and Una grew closer together and became mates. [5] They were rookery parents to the hatchlings of the 1958 and 1978 rookeries. Indeed, Lunette is their biological daugther. [6] They were of the correct age to parent the 1998 rookery as well, but probably did not do so due to the London Clan's population control system.

When Goliath and his companions arrived in London in early 1996, Leo and Una were shocked to see he had survived and they blamed him for the assumed death of Griff - partly because of their buried guilt. They knew, deep down inside, that they should have helped protect London alongside Griff. Leo and Una angrily accused him of being responsible for Griff's death, and sought revenge by capturing Elisa, Angela, and Bronx and chaining them up in the shop's basement. After being knocked out by Una's spell, Goliath realized that the only way that he could save his friends was by going back in time to 1940 to discover what had happened to Griff, and used the Phoenix Gate to return there.

After Goliath's departure, Leo realized, and convinced Una of this as well, that the real reason for their anger was their buried guilt, and freed Goliath's companions. When Goliath returned with Griff shortly thereafter, Leo and Una forgave him, and afterwards expanded their protectorate to cover London rather than just the shop and the clan's estate, protecting the innocent from those who would prey upon them. Una, who had spent most of her life only focused on the business of the magic store, now made the well-being of the community a priority and led her clan on this path as well. ("M.I.A.")

Una very much resembles a winged unicorn, hence her name. She has feathered wings, and hooves instead of clawed feet. Her tail is much shorter than other gargoyles' tails, and is covered with long hair. She is a skilled sorceress (no doubt thanks in part to the line of business that she is in), and may even have some precognitive ability; on the night that Griff went off to his final fight in the Battle of Britain, she mentioned having terrible forebodings for him, though this might have just been the normal feelings of anyone whose loved one is headed off to war.

Una has many similarities to Demona. Like Demona, Una was portrayed as more gentle in her younger years, though still not particularly fond of humans, she preferred to keep herself and her fellow clan members safe and avoid getting involved with human conflicts rather than adhere to the Gargoyle Way of protection. Later in life, Una became proficient in magic, had grown bitter from personal tragedy, repressed her own feelings of guilt and projected all the blame onto Goliath. However, with Leo's help, Una was able to face her feelings of guilt, forgave Goliath, and rediscovered the Gargoyle Way, all of which Demona has not yet found the strength of character to do. [7]