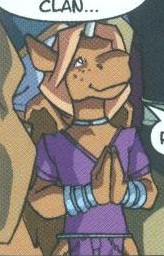 Lunette is a female gargoyle of the London Clan.

Lunette hatched in the rookery at Knight's Spur in 1978. 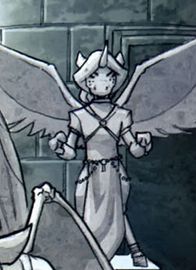 Lunette during the day.

Lunette resembles a winged unicorn. In fact, she greatly resembles Una, one of her rookery mothers. Her fur coloring is brown and her hair is gold, matching the coloring of her rookery father, Leo. Indeed, Una and Leo are her biological parents. [1]

Lunette is named after an Arthurian character, the damsel Lunete from Chretien de Troyes' French verse romance Yvain, or the Knight of the Lion. The original Lunete was a handmaiden of the Lady Laudine, who lived near the enchanted Fountain of Barenton in Brittany. Whenever anybody visited the fountain and poured water from it upon a nearby stone, a terrible thunderstorm would strike the lands about; because of the damage these storms did, Laudine married a knight who would defend the fountain and punish anybody who disturbed it. Sir Yvain, one of the knights of the Round Table, heard of the fountain's properties and came to test it; he mortally wounded Laudine's husband in the ensuing battle and pursued him all the way back to Laudine's castle, only to be trapped in the gatehouse between two portcullises. Lunete there met him and gave him a magic ring which made him invisible, allowing him to hide from Laudine's household; afterwards, Lunete persuaded Laudine to marry Yvain, so that he could succeed her late husband as the fountain's guardian.

Later on, Yvain went back temporarily to Arthur's court to see his friends, but in his excitement forgot to return to Laudine's castle. Laudine believed that Yvain had deliberately deserted her, and took her anger out on Lunete, condemning her to death. Fortunately, Yvain (who had realized by now what he had done) came to her rescue and saved her life.

The Gargoyles Lunette's name is also intended to resemble the names of her two biological parents, Leo and Una. [2]