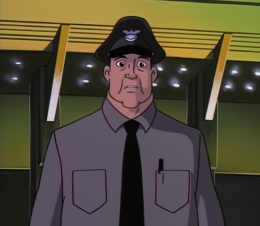 Some time later, a disguised Oberon entered. He objected to Oberon bringing Boudicca in, who was disguised as a large dog, stating that only guide dogs were allowed in the building. To get past him, Oberon performed the Avalonian equivalent of a Jedi Mind Trick on him to make him look the other way.

Greg Weisman has stated that Oberon saw Star Wars and may have thought Obi-Wan's name was a tribute to him. [1]