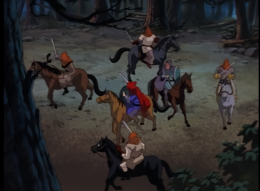 The Archmage's bandits surrounding Princess Elena and the Norman Ambassador.

In 975, the bandits attacked the Norman Ambassador and Princess Elena to steal the Phoenix Gate for the Archmage. However, they were foiled by time-traveling David Xanatos, Fox, and Petros Xanatos. All the bandits were either knocked out or fled. Whether they ever returned to the Archmage is unknown.

The bandits wore hoods and their faces were unrevealed. They apparently had no problem with killing, since one was about to bring his sword down on Princess Elena before Xanatos stopped him.