From GargWiki
(Redirected from Iago)
Jump to: navigation, search 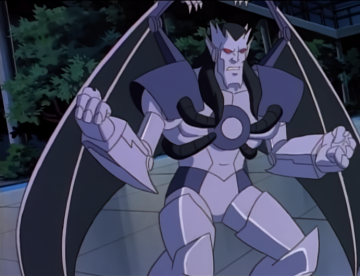 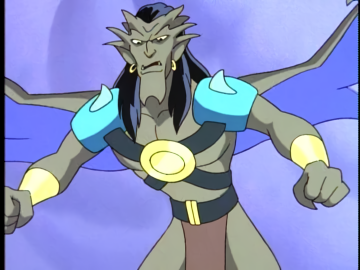 Coldsteel is a robotic gargoyle, formerly a flesh-and-blood member of the Wyvern Clan before his death in the Wyvern Massacre. His soul was one of three souls that were used to resurrect the cyborg Coldstone, before he was subsequently transferred into a robotic body created by David Xanatos. (Xanatos created the shell as a means of repaying Goliath for saving Alexander from Oberon, though he had other motives as well.)

Before attaining his own body, he was referred to in production material and by fans as Iago, although that name was never used in the series itself.

Iago was hatched in 938, alongside the rest of his rookery generation, which included Goliath, Demona, Othello, Desdemona, Brooksbro, and Hyppolyta. [1][2] Unlike most gargoyles, Iago was not a particularly noble or honorable individual, being corrupt and scheming. He entered into an alliance with the Archmage after Castle Wyvern was founded in 971, combining his cunning with the Archmage's magic, although the details of their plots are as yet unknown. [3]

Iago also lusted after Desdemona, and decided to gain her for himself in 993 by duping her mate Othello into thinking that Desdemona and Goliath were lovers, then claiming her in the confusion that followed (he also attempted to make Demona jealous of Desdemona, but Demona didn't give credit to the rumor for a second). [4] However, his scheme eventually failed, leaving him with a strong grudge against Goliath afterwards. He was temporarily banished by Goliath from Castle Wyvern for his crime, but had returned by 994. Nothing is known about his year as a rogue gargoyle. [5]

Like most of the other Wyvern gargoyles, Iago was killed by Hakon and his Vikings in 994 during the Wyvern Massacre. When Demona and Xanatos created Coldstone in February of 1995, they used pieces of Iago and Desdemona's stone remains, as well as Othello's own fragments, to assemble his body, resulting in the revival of Iago and Desdemona's souls as well as Othello's. ("Awakening: Part One", "Reawakening")

Iago nevertheless remained dormant until after Coldstone was damaged by the virus at the Goldencup Bakery Building and all three souls began vying for control of Coldstone's body. When Iago became the dominant soul in possession of Coldstone's body, he tried to kill Goliath and the Manhattan Clan, as well as set Othello and Goliath against each other once more as he had done a thousand years before. His plans were foiled, however, and he was temporarily defeated by the virus. ("Legion")

Iago was re-awakened by Demona and Macbeth when they kidnapped Coldstone from the clock tower, and helped them fight against the gargoyles and Elisa until Othello and Desdemona's souls defeated him. ("High Noon") He nevertheless remained a threat, always attempting to recover control of Coldstone's body, and for this reason Coldstone went into exile until the battle within could be decided. When Goliath, Angela, Elisa and Bronx encountered Coldstone in Tibet during the Avalon World Tour, Iago never took control of the Coldstone shell. However, Coldstone, under Othello's control, pretended Iago had taken control to force the travelers to leave Tibet without him, fearing Iago could be a danger to the clan and their rookery children on Avalon. ("Reunion")

Iago remained inside Coldstone until Xanatos recaptured the cybernetic gargoyle in the Himalayas. Puck and Alex then temporarily transferred the souls of Othello, Desdemona, and Iago to the bodies of Broadway, Angela, and Brooklyn, during which time Iago, in Brooklyn's body, eagerly plotted to dispose of Broadway/Othello and seize Desdemona in Angela's body for himself. But he soon became disappointed with Brooklyn's fighting skills, and after seeing the robotic body, Coldsteel, that Xanatos and Owen had made for him, became sufficiently impressed with it to allow Puck and Alex to transfer his soul to it. ("Possession")

After Alex transferred Iago's soul to Coldsteel, he eagerly left Castle Wyvern to create fresh havoc, but Coldstone and Coldfire went in pursuit of him to prevent him from endangering innocents. ("Possession") A few weeks later, Coldsteel arrived at the Scarab Corporation, summoned by Xanatos. ("Reunion") Xanatos offered to deactivate Coldsteel's tracking device if he performed an errand for Xanatos. Partnering up with Coyote 5.0 (whom Coldsteel saw potential in) along with a Steel Clan and Iron Clan robot, Coldsteel traveled to London to attack (and ultimately distract) Macbeth, Hudson, and Lexington, as well as three members of the London Clan while they were at Westminster Abbey protecting the Stone of Destiny for its transport to Scotland. While the Steel and Iron Clan robots were promptly destroyed by Lexington Griff, Staghart, and Constance, Coldsteel fought with Hudson, and unlike his robotic colleagues, showed sadistic pleasure in dishing out pain, nearly dismembering Hudson with his tentacles before being stopped by the timely arrival of Coldstone and Coldfire. ("The Rock," "Rock & Roll")

The newest additions convinced Coldsteel to hold off fighting until morning, when Hudson, Lexington, and the London Clan would be in stone sleep, allowing Coldsteel and Coyote 5.0 the advantage to face only Coldstone and Coldfire. The battle resumed at the Coldstream Bridge (where the Stone of Destiny was stalled in its transfer due to a bomb scare). There, Coldstone destroyed Coyote 5.0 and Coldfire damaged Coldsteel enough to have him dive into the river to escape. Hours later, Coldsteel returned the remains of Coyote 5.0 (which included the Coyote Diamond) to Xanatos, who promptly deactivated the tracking device. Coldsteel told Xanatos it was a "pleasure doing business," and he was off. ("Rock of Ages") 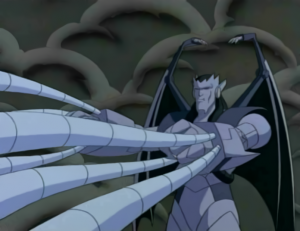 Iago had a slighter build than other gargoyles in his generation, such as Goliath or Othello. Behind his brow ridges, he had a sort of small crest sporting several horns, and two large spikes came off his chin. His wings were similar to Brooklyn and Demona's wings, but the three fingers were not arranged as a thumb and two claws, but rather as simply three claws. Sometimes Iago has been shown without a tail, but this was probably an error. Similarly, sometimes he is shown having one earring and sometimes two. He wore a sort of light armor with his loincloth.

Coldsteel bears a striking resemblance to Iago's original body (thanks to Xanatos accessing Coldstone's memory banks when designing the robotic body), and is equipped with metal tentacles that can repair themselves when damaged through down-graded nanotechnology similar to that used by Matrix. [6][7] He also contains a built-in tracking device.

Unlike other gargoyle villains, Coldsteel is evil for no apparent reason. While Demona's actions are unjustifiable, her anger towards humans is understandable given the way gargoyles were mistreated by Princess Katharine and the other humans at Castle Wyvern. Thailog's personality was programmed by Xanatos and Sevarius. Coldsteel on the other hand has never had any reason for his actions beyond petty jealousy. He is proof that gargoyles are as diverse a species as humans, equally capable of being good or bad.

Iago was never actually so called in the series, but merely given that name in the ending credits to "Legion" and "High Noon". His name is, of course, taken from the Iago in Shakespeare's play Othello, who similarly schemes against Othello and does all that he can to convince him that Desdemona is untrue to him, and who has been ranked as one of Shakespeare's greatest villains. The Iago/Coldsteel of Gargoyles might well consider his links to the Iago of Shakespeare a great compliment. 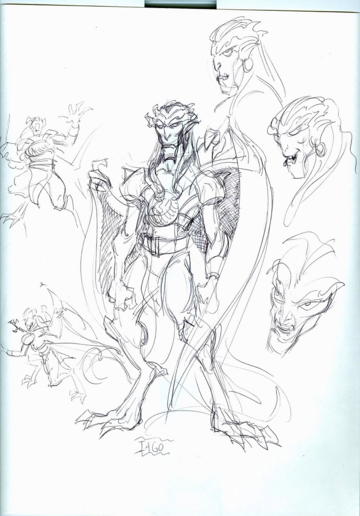