From GargWiki
(Redirected from Desdemona)
Jump to: navigation, search 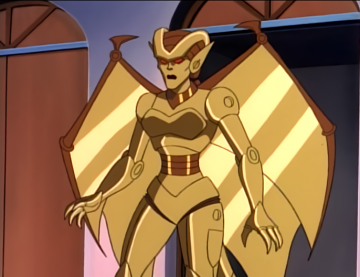 Coldfire is the robotic body made by Xanatos to house Desdemona's soul, as a means of repaying Goliath for saving Alexander from Oberon.

Desdemona was hatched in 938 at Wyvern Hill, alongside the rest of her rookery generation, and, when she grew up, fell in love with Othello and he with her. But Iago desired her for himself, and tried to trick Othello into believing that Desdemona and Goliath were lovers. Fortunately, Desdemona convinced Othello that she was indeed faithful to him, and peace was restored. ("Legion") 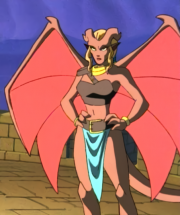 Greg Weisman once remarked that Desdemona may have a strong spiritual interest, though she wasn't clergy by definition. [1]

Desdemona and Othello were among the slain in the Wyvern Massacre of 994, but Xanatos and Demona used pieces of her, as well as of Othello and Iago, in creating Coldstone. ("Reawakening", "Legion") Because Coldstone was constructed from the parts of these three gargoyles, all three gargoyle souls were restored within him, and after his raid on the Goldencup Bakery Building, began to vie with one another for control of him. Iago once again tried to convince Othello that Desdemona and Goliath were lovers, but Desdemona was able to prevent it in the end, and they and Goliath defeated Iago in the struggle for control of Coldstone's body. ("Legion")

United once more, Othello and Desdemona’s souls were happy together, so happy that Othello decided at first to ignore Iago's schemings when Demona and Macbeth took control of the cybernetic gargoyle's body. However, Desdemona finally convinced him of his duty to the rest of the clan (with a little help from the Weird Sisters), leading to Othello at last deposing Iago from his control of Coldstone's body and thus saving Elisa and the clan from Demona and Macbeth. ("High Noon")

In 1996, Puck and Alexander magically removed Desdemona's soul and placed it in the Coldfire shell, after temporarily housing it in Angela's body. After Alex transferred Desdemona's soul to Coldfire, she accompanied Coldstone in her new body in pursuit of Coldsteel. ("Possession")

Coldfire and Coldstone searched the world for Coldsteel and eventually came to Tibet, where Coldstone had spent some time before. They were at a loss in their search until Xanatos activated Coldfire's tracking device in mid-November, 1996 and used it to lead the pair to London, England where they arrived just in time to prevent Coldsteel from harming Hudson. ("Rock & Roll")

They then helped Hudson, Lexington, and members of the London Clan fight off Coldsteel and Coyote 5.0, defending the Stone of Destiny. During the day, the fight continued over the Coldstream Bridge. Coldfire managed to damage Coldsteel but he fell into the river and disappeared; Coyote 5.0 was destroyed by Coldstone. Later that night, Hudson convinced the pair to leave off the search for Coldsteel and return to the Manhattan Clan. ("Rock of Ages")

They returned to the Manhattan Clan the same night Brooklyn returned from his adventures, just in time to handle the Pack in Times Square. ("Phoenix")

Desdemona had tan skin, blond hair, and large curved horns. She had most unusual wings, which seemed to be shaped almost like a butterfly's. When she glided, each wing appeared to emerge from her back in two separate parts.

Coldfire bears a striking resemblance to Desdemona's original body (thanks to Xanatos accessing Coldstone's memory banks when designing the robotic body). [2] Unlike Coldstone, she is completely robotic. She has a golden "skin" and can shoot flames from the palms of her hands in battle. Unfortunately, her robotic body does not seem to work well in water. When submerged, her flame weapon does not work at all. Coldfire tends to avoid water.

Othello and Desdemona are the biological parents of Gabriel, although neither of them consider this important or see themselves in such a light, rather seeing themselves as parents to all their rookery children.

The name Desdemona is borrowed from Shakespeare's Othello, thanks to her role in "Legion" having a strong echo of the original Desdemona in the play, whom Iago falsely accused to Othello of having an affair with Cassio. 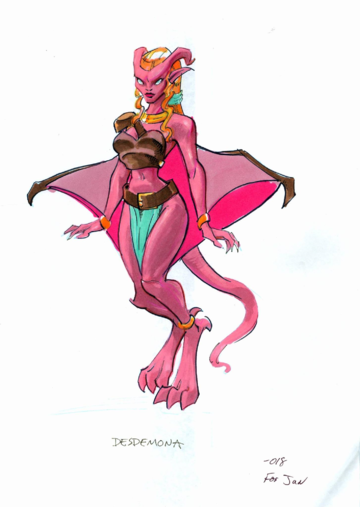 The name Desdemona was never actually used in the series, but merely in the ending credits to "Legion" and "High Noon"; her name does not actually exist in the Gargoyles Universe as Coldfire's does.