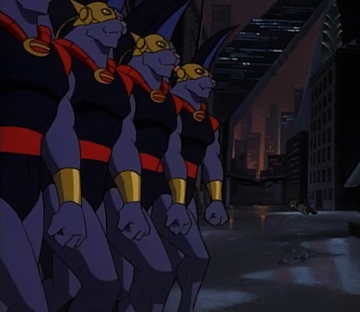 Talon Commandos are a band of cybernetized Mutates in Puck's illusion, created by Xanatos, or Lexington masquerading as him, and used as soldiers.

The Commandos greatly resemble Talon. They may have been clones of the mutate or perhaps they were simply altered with the same mutagenic formula. Like Talon, they had cat-like bodies, bat-like wings and could generate electrical blasts. Like the Thailog Shock Troops, they appear to have cybernetic brains, possibly to ensure their complete obedience.