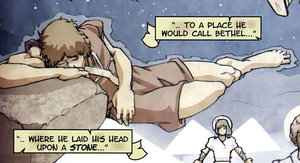 Jacob on the Stone 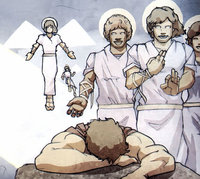 Jacob was the son of Isaac and grandson of Abraham. In ancient times, while escaping the wrath of his brother Esau, he came to Bethel. While there he laid his head upon a stone and had a vision of angels and a stairway to Heaven.

Jacob appears in the Book of Genesis as the son of Isaac, grandson of Abraham, and twin brother to Esau (though Esau was the older of the two). He was a trickster who first persuaded Esau to trade the birthright that was due him as the older son in return for some stew ("pottage", in the King James Version), and then disguised himself as Esau to dupe an elderly Isaac into bestowing the blessing meant for Esau upon him. Esau was understandably angry about this, however, and Jacob fled to his uncle Laban in Haran to escape Esau's wrath, along the way having his famous experience at Bethel.

At Haran, Jacob got a taste of his own medicine from Laban; he fell in love with Laban's pretty daughter Rachel, and agreed to work for Laban for seven years in order to marry her, but on the wedding day itself, Laban substituted Rachel's older sister Leah. Thus Jacob had to labor an extra seven years until he and Rachel could finally be married. By his two wives (and their handmaids Zilpah and Bilhah) Jacob had twelve sons, ancestors of the twelve tribes of Israel, and one daughter. Afterwards, Jacob returned home, along the way wrestling with a mysterious figure at night, who bestowed upon him the name of Israel. By this time, Esau's wrath had cooled, and he welcomed Jacob home in peace.

In his old age, Jacob and his family moved to Egypt, where their descendants would remain until the time of the Exodus.