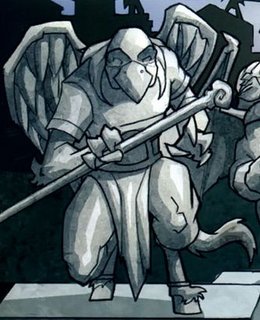 Old Pog during the day.

Old Pog is a male gargoyle of the London Clan.

Old Pog hatched in the rookery of Knight's Spur in 1798. As of late 1996, he was the oldest gargoyle of the clan and the only member of his rookery generation still alive. [1]

Old Pog resembles a hippogriff. He has a bird-like beak and horse-like hooves as feet. He also has a long, bushy tail and feathered wings. His feather coloring is white. As of 1996, he carries a staff.