The White House, located in Washington, D.C., is the official residence and office complex of the President of the United States of America.

In 1996, David Xanatos was ordered to attend a Halloween party at the White House to make contact with an Illuminati operative. ("Invitation Only") During the party, Xanatos and Fox talked to Ambassador Chung (who was surprised when she learned Alexander was younger than he looks), and David met in private with Chief Steward Quincy Hemings, the only known Illuminati member inside the White House, to receive his first assignment. ("Masque", "Bash")

According to Greg Weisman, Presidents of the real world are the same in the Gargoyles Universe. As such, throughout the aired series and up to the SLG comic series, Bill Clinton and his family occupy the White House. [1]

In "Masque", the dialogue box of Ambassador Chung superimposed over the image of the North façade of the White House is shown originating from a window of the Lincoln Bedroom. One floor lower is the East Room, the traditional reception room for large parties of the kind depicted in the issue. 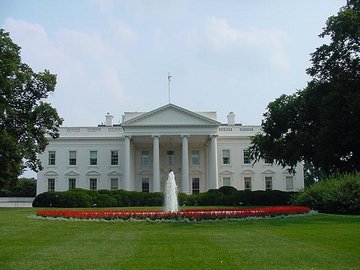 The White House in the real world.

Construction on the White House began on October 13, 1792, after a competition was held to find the design and architect. There were nine entrants, and President George Washington selected James Hoban's design. President Washington, however, required that the design be increased by thirty percent and that the East Room be added, a room similar to the large reception room at his home in Mount Vernon, Virginia.

The White House wasn't ready for occupancy until 1800, even though it was not complete, and so John Adams and his family were the first occupants.

Thomas Jefferson was the first president to propose expansions to the White House, eventually resulting in the construction of the East and West Colonnades to conceal such housekeeping operations as laundry and storage.

In the closing months of the War of 1812, British troops sacked Washington, D.C., in 1814 and burned most of it to the ground in retaliation for American troops burning York, modern-day Toronto, the year before. The White House was gutted and its surviving walls had to be torn down in order for reconstruction to take place under the supervision of Hoban and Benjamin Latrobe, the architect of the United States Capitol Building. It was after this reconstruction that the North and South Porticos were added in 1824 and 1829 respectively. Popular legend has it that the White House got its name because of the paint that was applied to the building to cover the burn marks resulting from the fire in 1814, but Dolly Madison had referred to the mansion as the "White House" in 1811; furthermore, because the burned, exterior walls had to be torn down for reconstruction, it is unlikely that they were painted first.

It wasn't until Theodore Roosevelt and his family moved into the White House that substantial additions were made to the mansion in the form of the East and West Wings, connected to the White House by colonnades built on the foundations of the original Jefferson colonnades. The West Wing was completed in 1902, but has undergone several renovations since then, including repairs after an electrical fire in 1929. The West Wing houses offices for the president's most senior staff and contains the Cabinet Room and the White House Situation Room. Most of the employees of the Executive Office of the President do not have offices in the White House Complex but instead are in the Old Executive Office Building across the street. The East Wing as it exists today was built in 1942 to cover construction of a bomb shelter, which was later converted to the Presidential Emergency Operations Center. The East Wing holds the offices of the First Lady and the President's Theater.

By the time of Harry Truman's administration, the White House had become structurally unsound. Truman and his family abandoned the White House for the Blair House, a residence across the street, for three years while the interior and exterior underwent major reconstruction work. Among the additions to the White House was a steel frame, central air conditioning, and two sub-basements.

In its current state, the White House Complex contains six stories and 55,000 ft² (5,100 m²) of floor space, containing 132 rooms and 35 bathrooms, 412 doors, 147 windows, eight fireplaces, eight staircases, and three elevators. In addition there are a tennis court, a (single-lane) bowling alley, a movie theater, a jogging track, a swimming pool, and putting green.

Although historically the White House Complex had been very open to the public -- gates were not installed until the administration of Franklin Roosevelt, and some presidents even met with members of the public who came to visit -- security concerns in recent years have seriously restricted the public's access to the White House.

After the Oklahoma City Bombing in 1995, the Secret Service closed down Pennsylvania Avenue behind the White House to vehicle traffic, eventually extending the blockade to the stretch of Pennsylvania Avenue by the Treasury Building. The closed road has since been converted into a pedestrian plaza. Following the attacks of September 11, 2001, public tours of the White House were suspended, only to resume on a limited basis in September 2003 to groups which make reservations through the office of their Member of Congress and after completing background checks. Security for the White House Complex is shared by the United States Secret Service and the United States Park Police.