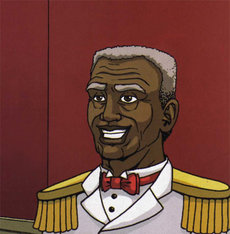 Quincy Hemings is the Chief Steward at the White House and a high ranking member of the Illuminati.

Quincy Hemings was born in 1900. [1] He has been on the White House staff since the administration of Theodore Roosevelt, and he was appointed as the Chief Steward during the Lyndon B. Johnson administration. ("Bash") Indeed, Quincy became Chief Steward on 23 November 1963, the day after John F. Kennedy was assassinated. [2][3]

Quincy Hemings is currently one of the two Number Twos in the Illuminati; the other is Duval.

On Halloween 1996, Mr. Duval arranged for David Xanatos to attend a ball at the White House, so that Quincy could meet him and give him his first real assignment: the acquisition of the Stone of Destiny for Peredur fab Ragnal. When Quincy revealed how long he had been working at the White House, Xanatos admitted that he was impressed. ("Invitation Only", "Masque", "Bash", "Rock of Ages")

While writing for the comic book, Greg Weisman mentally casts new characters so he can hear a voice. For Quincy, his actor of choice is Morgan Freeman.