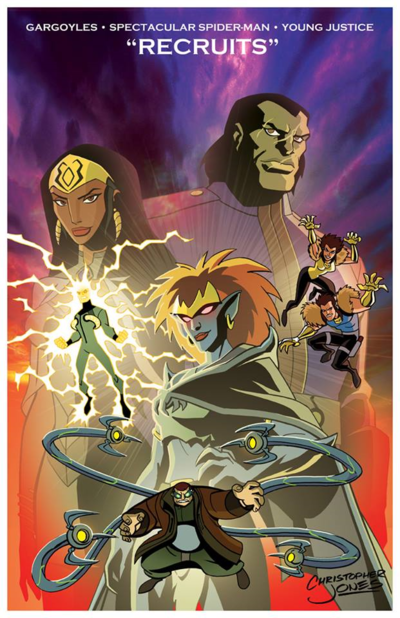 A depiction of the Radio Play's villains as illustrated by Christopher Jones.

"Recruits" was a Radio Play produced for CONvergence 2014 in Bloomington, Minnesota. It was performed on July 5th, 2014.

This story took place after "Phoenix", "Final Curtain", and "Endgame". It is a non-canonical crossover between Gargoyles, The Spectacular Spider-Man, and Young Justice. It is also a sequel to "Religious Studies 101: A Handful of Thorns" and is followed by "The Cosmos".

Shortly before sunrise, Lexington chats with a friend online using the alias "Tin Man." The friend, "Oracle," is eventually revealed to be Barbara Gordon.

The next evening, Goliath and Elisa discuss the new additions to the Manhattan Clan - including Katana, Nashville, Fu-Dog, Egwardo, and the returning Coldstone and Coldfire. Meanwhile, Brooklyn and Katana settle their unhatched child in Brooklyn's old rookery, leaving the egg in the care of Bronx and Fu-Dog.

Elsewhere, Jackal and Hyena manage to chase down Demona and deliver her to their new employer: Vandal Savage. Vandal greets Demona as an old friend, though Demona makes it clear that the feeling is not mutual. Still, she decides to hear out his proposal.

Near the Flatiron Building, three members of the Justice League's covert ops Team - Batgirl, Tigress, and Static - are in heavy pursuit as well. Their target turns out to be Spider-Man, whom they wish to recruit for the Team. Spidey is initially resistant to the idea, especially when the other young heroes reveal that they know his secret identity, and will need approval from his legal guardian (May Parker) before he can join. Instead, Peter suggests that a few friends of his might make for better recruits.

Meanwhile, at the Ravencroft Institute for the Criminally Insane, Queen Bee uses her pheromone powers to enthrall orderly Greg Bishansky. She orders him to lock up Dr. Ashley Kafka and release Electro and Doctor Octopus from their confinement. Octavius correctly surmises the reason for her visit: to recruit him as a replacement for the imprisoned Brain in Savage's secret organization, The Light.

Back at the Apex Tower, Vandal extends the same invitation to Demona, wishing for her to replace the incapacitated Ra's al Ghul. Demona is dismissive of forming an alliance with the largely human organization, though Savage claims that her attempts to exterminate the human race only help to weed out its unfittest members. He also offers her a "signing bonus" to ensure her cooperation.

Later on, the Clan gathers at the Eyrie Building to discuss a mystical artifact known as the Hand of Valmont. Brooklyn explains that cutting off Brother Valmont's hand during the Battle of Rathveramoen caused it to absorb magical energies from the Grimorum Arcanorum he was holding, after which it was passed down and preserved by his followers. The police believe that it may be in danger of being stolen from the Museum of Natural History, so Goliath, Brooklyn, Katana, Coldstone, Coldfire, and Hudson depart to watch over the museum.

Lexington, Broadway, and Angela, however, instead go to meet Spider-Man, who has recommended them all for the Team. The gargoyles are skeptical, especially given that Spidey isn't intending to join up himself; all apart from Nashville, who enthusiastically volunteers to join, but is ignored.

At the museum, Jackal and Hyena move in to steal the Hand of Valmont, clandestinely aided by Black Cat. Goliath, Hudson, Brooklyn, and Katana head in to intercept them, while Coldstone and Coldfire are attacked by Electro on the roof.

Back at Castle Wyvern, Doc Ock launches a surprise attack on Spider-Man and the younger gargoyles, joined soon afterward by Vandal Savage. Spidey is beat up enough that he resorts to using a signal device Tigress provided him, in order to call for backup. At the same time, the confusion allows Demona to infiltrate the castle, tranquilize Bronx and Fu-Dog, and locate the subject of Savage's "signing bonus": Egwardo, who she intends to kidnap and raise as her own.

Meanwhile, the Clan members at the museum manage to take down Jackal, Hyena, and Electro.

Tigress, Batgirl, and Static arrive at the castle to help Spidey, along with Blue Beetle. After learning (to their shock) that the potential recruits Peter told them about are gargoyles, all of the young heroes team up against Ock and Savage. Things take a turn for the worse, however, as Queen Bee arrives and enthralls Spider-Man, Static, and Blue Beetle, forcing them to attack the others.

Back within the rookery, Demona is being held off by Nashville. He manages to buy enough time for Angela and Tigress to arrive, both having realized that the other supervillains are merely serving as a distraction. Tigress manages to disarm Demona, leaving mother and daughter to hold a verbal and emotional standoff.

At the same time, Batgirl, Lexington, and Broadway work together to take out Queen Bee, freeing the enthralled heroes from her mind control. Goliath's group arrives soon afterward as well, having deduced that the battle at the museum was another distraction. As a result, Savage and Octavius choose to grab the unconscious Bee and depart. The Clan rushes to the rookery, where Demona has fled as well, unable to bring herself to kill Angela to get to Egwardo.

In the aftermath of the battle, Tigress once again extends an offer of membership to Spider-Man, Lexington, Broadway, and Angela. The gargoyles all decide to accept, while Peter promises to think about it. Young rebel Sabine Wren arrives to request a spot on the Team, but is rebuffed due to legal issues. Tigress leaves to return to Lian Nguyen-Harper and "J.W.", while Nashville continues to argue - unsuccessfully - that he is old enough to join the Team as well.

Elsewhere, Vandal Savage and Queen Bee welcome both Demona and Doctor Octopus into the Light. Savage then meets with Black Cat, who managed to steal the Hand of Valmont while the police were busy taking Jackal, Hyena, and Electro into custody. Finally, Savage calls upon Thailog, revealing himself to be a Three in the Illuminati, as well as the person who inducted the clone into their ranks in the first place. Vandal offers Thailog the last open seat in the Light, vacated by the disgraced Black Manta.

Later that night, Goliath and Elisa are approached by Batman, who wishes to recruit Goliath into the Justice League. Before they can consider the offer, however, Iron Man arrives to try to convince him to instead join the Avengers. Both are immediately interrupted by David Xanatos, who has returned from his retreat in Xanadu to offer Bruce Wayne and Tony Stark positions in his new club, "Rich Boys with Big Toys." Goliath and Elisa decide to leave the billionaires to sort this out amongst themselves.

And finally, at the very end of a very long night, "Tin Man" and "Oracle" are again chatting with each other online. Having deduced each other's identities, they offer their farewells by name, and head off for some well-deserved rest.