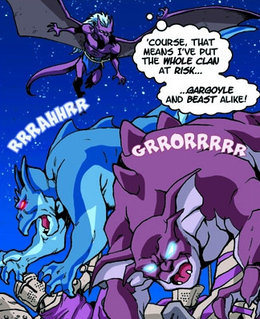 "Chaw" was an unnamed gargoyle beast in ancient Scotland. She never had a true name, but "Chaw" is used to identify her. She is Bronx's biological mother. [1]

Chaw was a member of the Wyvern Clan, hatched in 898. [2] She and her mate probably left to help form the Wyvern Splinter Clan. They and a handful of gargoyles escaped the fate of the rest of their clan. They later became part of Demona's Clan and fought in the Battle of Rathveramoen.

It is unknown what happened to Chaw after the Battle of Rathveramoen, though she is not among the gargoyles seen in Demona's Clan in 1020.

Chaw has two long horns and two shorter ones above her brows, two spikes along her spine, a long, pointed muzzle and a long tail. As a female gargoyle beast, her eyes are red with no visible pupils. Her blue coloration is identical to Bronx's.

Note: This character does not speak, therefore she does not have any lines.

The name "Chaw" was given to this character to distinguish her from other characters in the scripts for the comics. It is much easier than typing "Blue Female Gargoyle Beast" multiple times per script.