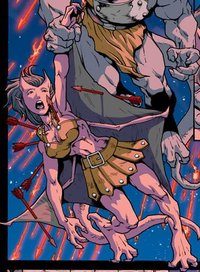 Sacrifice, after saving her mate's life.

"Sacrifice" was an unnamed gargoyles in medieval Scotland. She never had a true name, but "Sacrifice" is used to identify her.

Sacrifice was hatched in the rookery of the Wyvern Clan in 918. [1] She and her mate probably produced an egg in the 978 generation at Wyvern and would produce one of the "Eggs" in the 988 Wyvern rookery that would later hatch on Avalon. She and her mate left Wyvern with a group of gargoyles sometime between 988 and 994 to found a new clan. [2]

At some point after that, but before 997, the new clan was destroyed. This gargoyle, and a few others, however, managed to survive somehow and by 997 had joined the Lunfanan Cell of Demona's Clan. ("Tyrants")

At the Battle of Rathveramoen, she fought with the rest of her clan against Constantine. When Brother Valmont unleashed his rain of magical arrows, she shielded her mate with her own body, saving him at the cost of her own life. ("Phoenix")

Sacrifice is a small, web-winged gargoyle. Her wings are attached to her arms in a web-like structure, evocative of the wings of a flying squirrel. Like other web-winged gargoyles, her wings are pierced, which allows her to wear her clothes. [3] Her skin is a soft red color, with black coloring on her wings, and she has short black hair.

This character was referred to as "Sacrifice" in the scripts for the issues she appears in. Like "Othello", "Desdemona", and "Iago", it is a non-canon name which is never used in the actual comics. Calling her "Sacrifice" was probably just simpler than calling her "Demona's Second's Mate" or the like when her name had to be typed repeatedly.