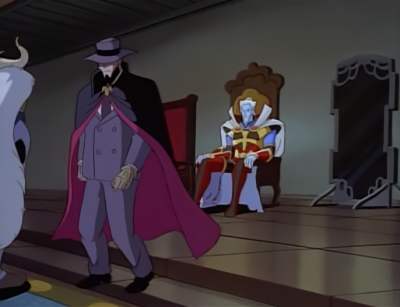 Nought at The Gathering.

Nought is a Child of Oberon. In 1996, he returned to Avalon for the Gathering and paid fealty to Oberon. Little else is known about him. ("The Gathering Part One")

During the production of "The Gathering" Part One, tight schedules meant that there was not enough time to choose and design the mythological characters that should have attended the Gathering. Therefore, in addition to the Children of Oberon that had appeared in earlier episodes (e.g. Odin, Banshee, Raven, etc.), the scene was populated by random designs (and perhaps a few designs reused from "The New Olympians", for which there had been similar problems). One of these random designs was the caped figure who greeted Oberon just before Odin. [1] When asked about this mysterious character on Ask Greg, Greg Weisman responded, "He's Nobody or Nought. And he's greeting Oberon, just like everyone else." [2] The name Nought stuck.

Greg Weisman now has plans for the character in future stories, as well as some notions of connecting him to a couple of mythological figures. [3][4] When asked what Nought would have been the "god" of, he replied: "Nothing." [5] In addition, Greg has joked that the same voice actor for Claw was also cast for Nought. [6]