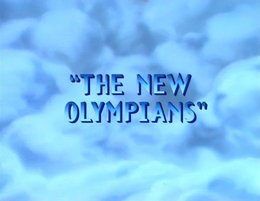 "The New Olympians" is the fiftieth televised episode of the series Gargoyles, and the thirty-seventh episode of Season 2. It originally aired on February 14, 1996.

The travellers find themselves on the hidden island of New Olympus, and are greeted by a hostile police force who imprison Elisa for being human. She is set free, but not allowed to leave the island, and then imprisoned again for unintentionally causing a riot amongst the prejudiced New Olympians. She's jailed next to the evil shape-shifter Proteus, who tricks Goliath into setting him free, and then leaves with Elisa while posing as Goliath. Elisa sees through his disguise and risks her freedom to stop Proteus from destroying the island, and she is set free.

Some New Olympians realize that not all humans are evil, and that they would eventually have to make themselves known to the world.

"I'll choose to take that as a compliment." - Taurus and Elisa

Like the episode "Pendragon", "The New Olympians" was designed as a back-door pilot for a Gargoyles spin-off series, also called The New Olympians. In the series, a young man named Terry Chung would be shipwrecked on New Olympus while sailing around the world by himself, and his arrival would serve as the catalyst for the New Olympians deciding to announce themselves to the world. The series would have focused on the impact of the New Olympians' revealing themselves, and would have included further schemes from Proteus, Xanatos entering into trading relations with New Olympus for his own benefit, an attempt by a New Olympian named Jove and his followers to make the humans worship the New Olympians as gods as they had done in ancient times, and a Romeo and Juliet-type relationship between Terry and the female New Olympian Sphinx.

The individual New Olympians in this episode are all based on figures in Greek mythology, and even named after them. See the background page for each character to learn more: Boreas, Ekidna, Helios, Kiron, Proteus, Talos, and Taurus.

The New Olympians recognize Goliath, Angela, and Bronx as gargoyles at once and are well-disposed towards them. According to Greg Weisman, there is an actual gargoyle clan on New Olympus, the New Olympian Clan (but one which apparently didn't bother showing up to greet the visitors).

Taurus and Proteus appeared in "Seeing Isn't Believing", an episode of the non-canonical The Goliath Chronicles.

When Elisa has her tussle with Helios, there is a cut when he throws her down on the sidewalk.