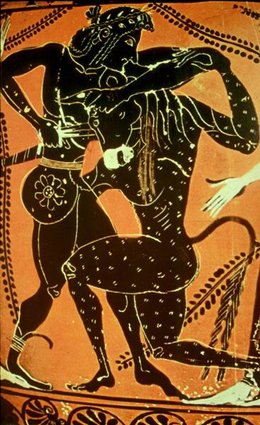 The Minotaur locked in battle with Theseus

The Minotaur was an ancestor of Taurus in the Greek Bronze Age. Around 1230 B.C., the Minotaur (in the last few years of his life), was placed in the Labyrinth and was slain by the hero Theseus. [1]

Taurus looks upon the Minotaur's fate as a reason for viewing humans as dangerous. ("The New Olympians")

The original Minotaur was descended from a mortal and a member of the Third Race, effectively being a New Olympian before the term ever existed. [2][3]

The Minotaur was a bull-headed man who lived in the Labyrinth of Knossos in Greek mythology. He was the son of Queen Pasiphae, the wife of King Minos of Crete, by a magnificent white bull which Minos was supposed to sacrifice to Poseidon, but decided to keep for himself; Pasiphae was filled with desire for the bull by the gods to punish Minos for his oath-breaking. When the Minotaur was born, Minos, disgusted by it, ordered the famous craftsman Daedalus to build the Labyrinth in which to imprison it and hide it from the world. Later on, after defeating Athens in battle, he condemned the Athenians to send seven youths and seven maidens to Crete at regular intervals (according to some versions of the myth, a year, according to others, seven years), to be fed to the Minotaur. This grisly tribute finally came to an end when the young Theseus went to Crete, entered the Labyrinth, and slew the Minotaur, finding his way out of the maze again through a ball of thread given to him by Minos’ daughter Ariadne.

Taurus clearly remembers the Minotaur's fate in a different light than that given by the traditional Greek myths, making no mention of the Athenian tribute but claiming that his ancestor was starved before Theseus killed him. Which of the two tales - if either - is closer to the truth about the Minotaur's life in the Gargoyles Universe is as yet unknown.