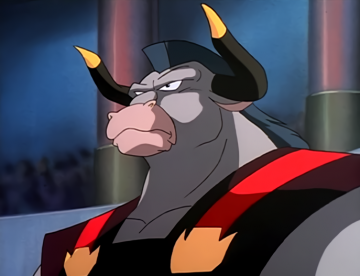 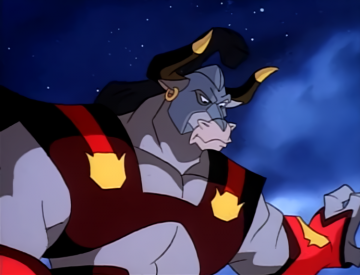 Taurus is a New Olympian, and New Olympus's Chief of Security.

Taurus is descended from the original Minotaur who was slain by Theseus, and is himself a minotaur, as was his father, who preceded him as Chief of Security, and who was murdered by Proteus. Because of his family history, Taurus was suspicious towards humans, and so when Elisa came to New Olympus on the Avalon World Tour, received her hostilely, even incarcerating her to prevent her presence from causing riots among the New Olympians. Elisa attempted to bond with Taurus by telling him that she too owed her career in law enforcement to following in her father's footsteps, but Taurus refused to listen to her. However, he is also fair minded considering that when a mob gathered to harass Elisa in her cell, Taurus immediately broke it up.

When Proteus, disguised as Goliath, broke Elisa out, Taurus went in pursuit of them to recapture. As it happened, Elisa, suspicious of "Goliath" being active in the day time and his suspiciously devious plan to cause an explosive overload of the city's main power generator, lured the minotaur to him. Taurus finally cornered them at the Columnadium, where Elisa convinced him that the gargoyle was an impostor. Realizing he was facing Proteus, Taurus defeated him, saved the city, and returned the criminal to prison. Astonished that Elisa chose to remain in New Olympus to help capture the villainous shape-shifter rather than escape, he conceded that perhaps not all humans were evil, and let her leave the island with her friends. ("The New Olympians")

Later on, he will be part of the New Olympian delegation to the outside world as its primary ambassador. [1] While Taurus is, at first, against it, Boreas chooses him because he will keep New Olympus's best interests in mind.

Taurus' name comes from the Greek word for "bull", made particularly familiar as the name of the second constellation of the Zodiac, representing Zeus in bull-form carrying Europa away to Crete.