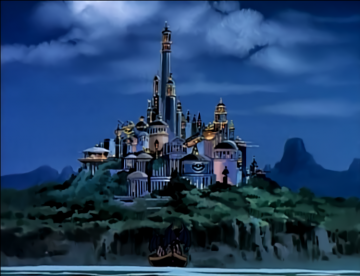 New Olympus is the island home of the New Olympians.

The New Olympians withdrew to New Olympus at some unspecified date (although presumably between the founding of Rome and the reign of Caesar Augustus) to seal themselves off from the outside world on account of their persecution by humans. New Olympus was founded earlier (well before 3 B.C.), with colonization occurring over a long period of time before going into absolute isolation. [1][2] Its precise location is unknown, although presumably it is somewhere in the Atlantic or Pacific Ocean. [3]

Because the New Olympians were able to build upon the technological advancements of their ancestors without interference from the outside world, they effectively became highly advanced in what is arguably very few generations. Their society also also had the privilege of having citizens that could already fly, thus, the invention of chariots capable of flight was merely an accommodation for those without wings. [4]

Centuries later, the New Olympians would begin studying the English language via radio and television transmissions. They would eventually program the language into some kind of translation device. [5]

New Olympus remained undisturbed by the outside world until 1996, when Goliath, Elisa, Angela, and Bronx came here on the Avalon World Tour. The New Olympians, suspicious of Elisa because of their ancestors' experiences with humans, temporarily imprisoned her, but after she helped save the island from Proteus, released her. ("The New Olympians")

Later on, Terry Chung will come to New Olympus, and serve as the catalyst for it making contact with the human world. [6]

New Olympus is hidden from the outside world by a sophisticated cloaking device, although it is doubtful as to how much longer that will be the case, given the advance of human technology.

Noted landmarks of New Olympus include the Senate-House, where the citizens meet to deal with government issues, the Columnadium, which houses the island's power supply, Mount Thanatos, where the New Olympian Clan of gargoyles resides, and the prison, where Proteus is currently incarcerated. [7]

The island is governed by a representative democracy, with positions such as Boreas' being elected. [8][9] Its society is largely a mixture of ancient Greek and Roman cultures. [10] The New Olympian Clan are full citizens but largely govern themselves. [11] 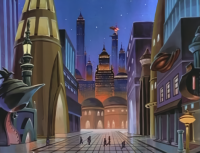 The City of New Olympus. 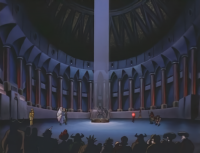 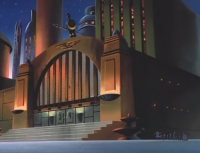 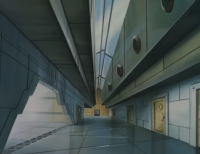 Inside the Prison.
Retrieved from "https://www.gargwiki.net/index.php?title=New_Olympus&oldid=31164"
Category: