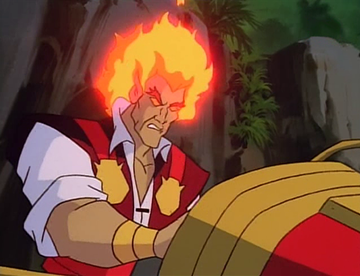 Helios is a New Olympian, and a member of the security force under Taurus that guards the island.

He is very unfavorably disposed towards humans, and even took part in the riot outside Elisa's cell. After the New Olympians make contact with the outside world, Helios will join Jove's faction, which believes that the New Olympians should hold sway over humans once more, as they did in ancient times. [1]

Helios looks like a man with fiery hair, and has the ability to produce fireballs and hurl them as weapons.

Helios is named after the god of the sun in Greek mythology, who each day drove his fiery chariot pulling the sun across the heavens. (Apollo only received the title of sun-god very late in the development of classical mythology). He was the son of the Titans Hyperion and Theia, and the brother of Selene, the goddess of the moon (after whom the dark-haired Weird Sister Seline is named), and Eos, the goddess of the dawn.