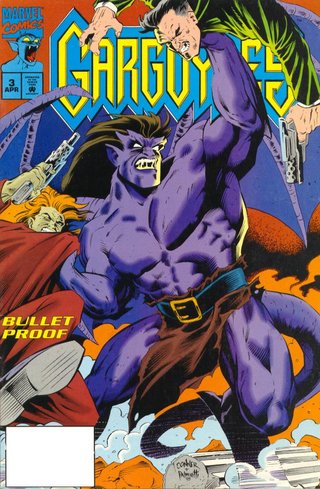 "Rude Awakening" is the third issue of the non-canonical Gargoyles comic book published by Marvel Comics. It was released in April, 1995.

Following the cliffhanger of the previous issue, Lexington wakes up just in time to avoid being smashed by Tony Dracon. After a brief scuffle, he returns to the Clock Tower, where Elisa tells him about the previous night's murder, and they realize Broadway has the key piece of evidence they need to put Dracon away. When they realize Brooklyn and Broadway are still missing, the clan's goal becomes to find them and get Broadway's evidence back to Elisa before she runs out of time to charge the suspect with the crime.

Brooklyn awakens to find himself in a warehouse, while Broadway finds himself on the back of a pickup truck carrying several other statues. This is following the events of the previous issue, in which they turned to stone atop a condemned church, and all the statues were carried away to be sold during the day.

Lexington believes he can discover Brooklyn and Broadway's locations by using the tracking devices he had given them the night before. However, Dracon took his device while he was roosting. The gargoyles return to Dracon's penthouse to get it back.

Dracon realizes the devices can be used to track the gargoyles]and makes note of the tracker's frequency before they retrieve it from him. Once they've left, he sends his butler out to buy his own tracker, and sends his men to exterminate the gargoyles. A battle breaks out and Dracon's men are defeated.

Elisa remarks that she needs both the gun that was used and the bullet to be able to tie Dracon's men to the crime. Once Brooklyn is located, he is sent back to the scene of the crime to get the gun before the time runs out, while the other gargoyles continue searching for Broadway.

Elisa's sister Beth Maza shows up at her door looking for a place to sleep late that night.

The end of the issue reveals what happened to LaVonne: a boatman who works for Gen-U-Tech comments that he's had to ship a lot of cargo for the company lately, and he's heard rumors that he's been dumping the dead bodies of test subjects. In the middle of his trip, the "body" he's dumping springs to life and breaks out of its crate. It's LaVonne, and she appears to be a gargoyle.

This issue is notable in that it addresses some of the day-to-day difficulties the gargoyles face, some of which are never mentioned in the canon material. For example, Goliath comments that he's surprised the church is being torn down, because churches are rarely torn down - which is why gargoyles consider them reliable places to sleep during the day. Also, Brooklyn encounters the trouble of trying to glide when there's no wind, and he inventively uses the air current from a helicopter to glide on.

This issue also gives a little more detail into Elisa's attitude towards receiving the gargoyles' help in solving crimes. She's glad to receive the help, but she also makes sure not to be around when the gargoyles are attacking Dracon's men, as police have to observe "due process".

Dracon's discovery that gargoyles turn to stone during the day is somewhat inconsistent with his depiction in later canon material, in which he doesn't appear to be aware of that fact.

A few words are exchanged between Elisa and Beth about what she was doing out so late. This reinforces the "troubled teen" image she's given in the comics, as opposed to the relatively clean image she has in the canon material.

This issue contains a two-page "Letters" page (as opposed to the one-page one the previous issues had had). The editors say this is to accommodate the large bulk of fan mail they were receiving at the time. In previous issues, the editors had asked fans who wrote in to include their ages, and the fans who give their ages here range in age from 24 to 46. Many of them comment on how much they love both the TV series and the comics, and mention that they like how the material leans more towards the adult side - showing that even back during its heyday, Gargoyles was recognized as being something for both kids and adults.

The fans also mention Gargoyles fan clubs which are starting to form over the Internet, and some of these may have been precursors to the modern Gargoyles fan movement.

The "Letters" page also includes a letter from a dissatisfied reader, and the editors claim it's the only negative letter they received. The dissatisfied reader, then 24 year-old Anthony Zarka of San Antonio, T.X. is a fan of the animated series, but is writing to complain about the comic, which in his view, has "slaughtered" one of his favorite television shows. Most of his complaints have to do with the artwork of the comic, and in defense, the editors point out that animation artists are unable to give cartoons the same level of detail that comic book artists can, so they like to increase the detail wherever they can.