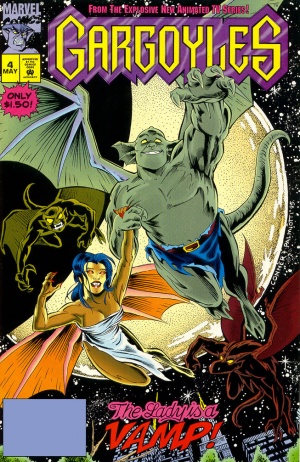 LaVonne was a runaway who became the girlfriend of Price, a gun dealer for Tony Dracon. When he became late in his payments to Dracon, Glasses and another man of Dracon's came to collect when the pair visited the nightclub Sacrilege. When they tried to abduct Price and LaVonne, Price tried to escape and was shot dead by the other man working for Dracon. ("Always Darkest Before Dawn")

LaVonne was kidnapped and turned over to Owen Burnett, who in turn took her to Dr. Phobos for use as a human test subject. Phobos used her in Project Nosferatu, which was designed to create a vampire-like creature that would be attractive to gargoyles. She was mutated into a bat-winged vampire, but the process put her into a death-like state. ("Blood From A Stone") She was thought dead, and was about to be dumped in the sea when she revived, killed the man who was going to dump her, and drank his blood. ("Rude Awakening")

Realizing that she now had the power to gain revenge for herself and Price, she began a bloody campaign of revenge, killing those responsible for her current condition. When she saw Broadway save Beth Maza from three thugs, her latent desires for gargoyle blood (programmed into her by Phobos) took over and she was drawn to him. Broadway was attracted to her as well, and they went on a date.

The next night, Broadway took her to meet the rest of the clan, and Brooklyn and Lexington were attracted to her as well, and the Trio fought over her. As they fought, LaVonne saved a teenage boy who slipped and fell off a bridge, but barely resisted the urge to drink his blood. Becoming aware of their bad behavior, Brooklyn and Lexington left LaVonne and Broadway alone. But as sunrise neared, LaVonne could no longer resist her desire for gargoyle blood and attacked Broadway. She begged him to stop her by killing her, as Broadway was the only one who'd treated her well during her life. The sun rose, and Broadway turned to stone with LaVonne held tightly in his arms. The pair plummeted into a greenhouse- leaving behind a stone Broadway holding the charred skeleton of LaVonne. ("Blood From A Stone")