From GargWiki
(Redirected from Judge Roebling)
Jump to: navigation, search 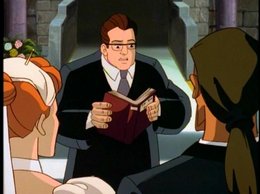 Judge Ian Roebling is a New York Justice of the Peace, who officiated at Xanatos and Fox’s wedding in 1995. ("Vows") Xanatos chose Roebling to conduct the ceremony because he knew the judge could be trusted. [1]

Roebling later attended the Xanatoses' Halloween party in 1996, dressed as a knight (under the name of Sir Ian of Oxford), where he met Goliath again, and Delilah for the first time. ("Masque")