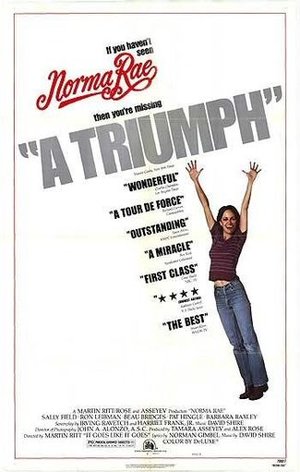 Norma Rae is a 1979 American drama film starring Sally Field. Thailog has, apparently seen the film, and even snidely called Maggie the Cat "Norma Rae" when she was pleading with the clones to not listen to him. ("Masque")

Norma Rae Webster (Sally Field) is a minimum-wage worker in a cotton mill that has taken too much of a toll on the health of her family for her to ignore her Dickensian working conditions. After hearing a speech by New York union organizer Reuben Warshowsky (Ron Leibman), Norma Rae decides to join the effort to unionize her shop. This causes conflict at home when Norma Rae's husband Sonny (Beau Bridges) says she's not spending enough time in the home. Despite the pressure brought to bear by management, Norma Rae successfully orchestrates an election to unionize the factory, resulting in victory for the union.

It won Academy Awards for Best Actress in a Leading Role (Sally Field) and Best Original Song (for David Shire and Norman Gimbel for "It Goes Like It Goes"). It was also nominated for Best Picture and for Best Writing, Screenplay Based on Material from Another Medium. The film was also nominated to the Palme d'Or (Golden Palm) at the 1979 Cannes Film Festival and Field was awarded Best Actress for her performance.