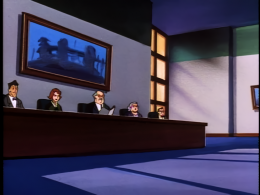 The parole board were four humans who served with their chairman.

They cited Fox’s exemplary behavior while incarcerated, but were most impressed by how she stayed to help the guard when the other members of the Pack escaped.

The other members of the board were a brown haired man with a long chin and a bow tie, a brunette woman, an older heavyset gray haired woman, and a man with dark hair, glasses and bow tie.