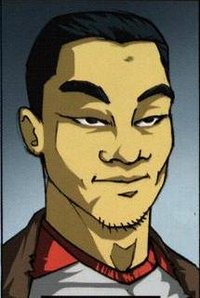 Tri Chung is a detective in the NYPD, and a member of the Gargoyle Taskforce. Cedric Harris is his partner. ("Invitation Only")

Tri Chung is a human male of Chinese-Vietnamese descent. [1] He and Terry are first cousins, making Amanda Chung his aunt. [2]

Greg Weisman has previously used the name Tri Chung, also for a Chinese-Vietnamese law enforcement officer (this time as an alien-tracker and former FBI agent), in his development of the series Roswell Conspiracies: Aliens, Myths and Legends. This Tri Chung is the senior partner of Tony Markus, the show's protagonist. The character is described as "not too talkative" (which also describes the Gargoyles character, who has not yet spoken). [4] He first tried to use the name Tri Chung as the husband of the Mayor of Star City in his Black Canary miniseries that he wrote for DC, but which was never published. [5]