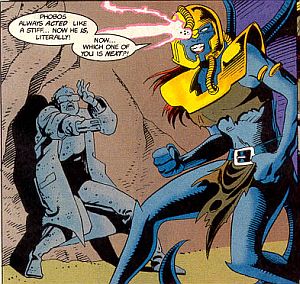 The Medusa Device was a weapon created by Dr. Phobos. Through analysis of the factors that enabled gargoyles to enter stone sleep, Phobos was able to create a device that could turn any organic matter to stone. When Xanatos came to Phobos's Gen-U-Tech Island to see the completed Device, he was pitted against Demona, who also wanted the weapon. In the meantime, the Manhattan Clan tracked the industrialist to the artificial island. Xanatos used a taser to stun Demona, then took the device, mounting it on a specially designed Steel Clan battle suit and using its petrification ability against the clan. ("Venus In Stone")

The weapon was torn from the suit's body by Phobos's genetically engineered bodyguard, Venus, and thrown to the ground -- at Demona's feet. Demona used the weapon to turn Dr. Phobos to stone after he initiated Gen-U-Tech Island's self-destruct sequence, and then used it herself against the clan, battling them on the disintegrating island. Venus flew at her in attack, and Demona turned her to stone, but the hybrid's momentum knocked them both off a collapsing cliff, into the water. Despite this, Demona nearly got away with the device . . . until Hudson blasted her with a flare, causing her to drop it into the ocean. It sunk to the bottom, presumably ruined. ("Venus Rising")