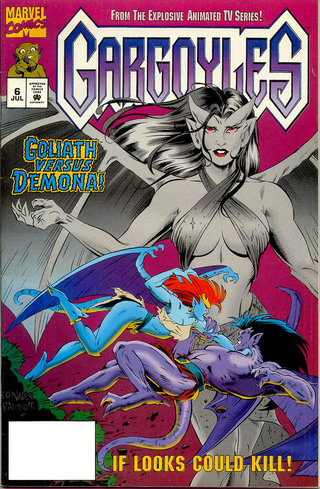 "Venus In Stone" is the sixth issue of the non-canonical Gargoyles comic book published by Marvel Comics. It was released in July, 1995.

Dr. Phobos awakens Venus a few weeks prematurely, under the belief that she will obey all his orders, and protect her master from Xanatos and the gargoyles at all cost. However, once she's awakened, she develops chemistry with Goliath instantly, and she ends up serving him instead. During the ongoing battle, which continues from the previous issue, she is turned to stone by the Medusa Device, and is killed protecting Goliath from Demona.

Dr. Phobos is also turned to stone and killed by the Medusa Device.

Fearful for his own life in the last few seconds before Demona uses the Medusa Device on him, Dr. Phobos triggers the island's self-destruct mechanism, causing all personnel to evacuate, and wreaking havoc among the gargoyles, who are still in battle with Demona. During the commotion, Xanatos manages to escape.

The chemistry between Goliath and Venus causes Elisa to feel jealous. Venus, by contrast, admires her bravery, and feels no bitterness towards Elisa.

For a brief time, Xanatos also tries to use the Medusa Device on the gargoyles.

Demona manages to escape with the Medusa Device temporarily, but her escape is foiled by Hudson, who manages to get the device away from her at the last moment.

Venus takes great pride in her clan, and takes great offense from any who attack it or sully its name - including Dr. Phobos and Xanatos.

Goliath pledges to protect Venus, on the grounds that although she is one of Xanatos' creations, she is made of both his and Elisa's DNA, so she deserves to be given a chance.

Goliath tastes incest. And it tastes like old gym socks. And hey, ...from this angle... that kinda looks like.... SICK!!!

Like Thailog, who engineered Delilah in the canon material, Dr. Phobos also programs Venus to obey his every command. The reason for Venus' loyalty to Goliath instead of Dr. Phobos is not made clear.

Xanatos' attempts to destroy the gargoyles is inconsistent with his behavior in the canon material, in which he has stated on numerous occasions that he wants them alive.

Demona's statement that she plans to use the Medusa Device to turn all human beings to stone is a desire she later realized in the canonical "City of Stone" episodes.

The "Letters" page inaccurately states that Bronx is still a puppy.