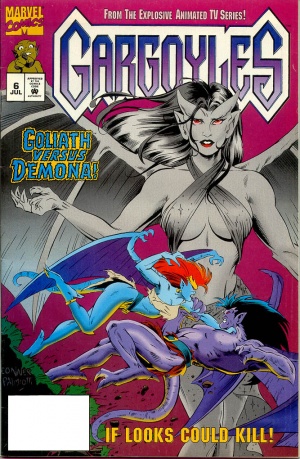 Venus was a creation of Gen-U-Tech scientist Dr. Phobos using the DNA of Goliath and Elisa Maza. Phobos concealed her existence from both Demona and Xanatos, as he intended Venus to be his personal bodyguard. She was also supposed to eliminate everything that the paranoid Phobos saw as a threat, namely Xanatos, Demona, and the Manhattan Clan. However, despite this, Demona and Xanatos both somehow discovered her existence before her completion. ("Venus Rising")

When Elisa and the Manhattan Clan raided Gen-U-Tech Island, Venus was activated before her programming could be fully completed to protect Phobos. It was at that point Phobos named her Venus, due to her beauty. ("Venus In Stone") She did follow part of her programming- she attacked Xanatos, forcing him to retreat from the artificial island. However, she immediately saw Goliath as her mate, and due to the greater loyalty she felt to her own people, Phobos could no longer control her. This rebellion, combined with threats from Demona, caused Phobos to set off Gen-U-Tech Island's self-destruct sequence. Venus helped the clan fight Demona, but when Demona threatened to petrify Goliath with her newly-acquired Medusa Device, Venus flew at her at high speed. Venus was turned to stone by the Device, but her momentum knocked both her and Demona off of the ledge she was on. Venus's petrified body sunk to the bottom of the sea.

Venus left her mark on both Elisa and Goliath. Goliath found himself attracted to this gargoyle, who looked so much like Elisa, and Elisa felt jealousy towards Venus over Goliath, an emotion she was not proud to feel. ("Venus Rising")

Weeks later, an unnamed sorcerer used his power to reawaken Venus, for use in some upcoming conflict. ("Into the Future") The series was cancelled at #11 when Marvel filed for bankruptcy, and the plotline was never continued.