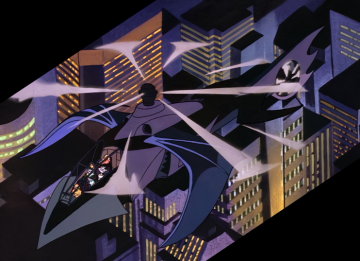 "Lex's helicopter" was a helicopter originally used by the Pack and later redesigned by Lexington to capture Jackal and Hyena. ("Her Brother's Keeper") Afterward, the gargoyles hid the helicoper permanently. Greg Weisman has suggested that they may have turned it into a planter. [1][2]

January 29th, 1995: It starts to snow. Elisa Maza gives Derek Maza a recording of Fox's revelations. The gargoyles hide the helicopter - permanently. [3] Jackal and Hyena are arrested on charges of attempted murder.

The helicopter was a source of embarrassment for the production team. Kenner wanted to market a helicopter toy for the gargoyles, in spite of the difficulty of justifying its presence in a show where most of the main characters can glide. So, Greg Weisman put the helicopter in, and then Kenner decided not to make a toy out of it. A toy called the Night Striker was quite similar, however. [4][5]