From GargWiki
(Redirected from Goliath Chronicles)
Jump to: navigation, search 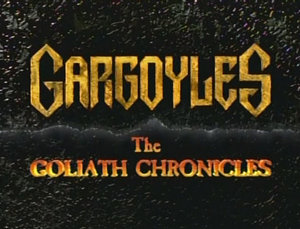 The Goliath Chronicles was the name of Gargoyles' third season. Whereas the first two seasons had aired in the afternoon in syndication, as part of "The Disney Afternoon", Chronicles aired on Saturday mornings on the American Broadcasting Company (ABC, which had recently been acquired by The Walt Disney Company). The series originally aired between 7 September 1996 and 15 February 1997. The series was known as The Goliath Chronicles because Goliath would give a short monologue at the beginning and end of each episode.

After the first episode, "The Journey", all the producers and story editors (including series creator Greg Weisman), along with most of the other crew, were replaced. The following twelve episodes were poorly received by most of the fans, for various reasons including poor characterization and continuity. As a result, it is not considered to be canon, and was ignored when Greg Weisman later continued the Gargoyles storyline through Slave Labor Graphics' comic book series.

According to Weisman, the original crew "had considerable freedom the first two years" because Gargoyles was a syndicated series, while Chronicles "was network and had much tougher standard and practices rules." [1] Weisman also stated that, "Part of the problem was that the staff of Chronicles took springboards I came up with and then went WAY south with them." [2] For example, the episode "And Justice For All" was based on Weisman's plan for Goliath to be on trial for his sentience, but in the actual episode he was on trial for robbing a jewelry store. [3] "Ransom" was intended to have tricksters Anansi, Coyote, Puck, and Raven, with Raven kidnapping Alex; the final episode had Alex getting kidnapped by a corrupt New York City politician. [4][5] The episode "Runaways" originally had Brooklyn being whisked away be the Phoenix Gate only to be returned to his correct time 40 second later and 40 years older (the story as intended was eventually produced with Gargoyles SLG issues "The Gate," "Tyrants," and "Phoenix"). [6][7] Much of this may be due to the fact that the team working on Chronicles had very little time to familiarize themselves with the original show before they began production, badly hindering their efforts.

Story editor Eric Lewald was concurrently the story editor on X-Men: The Animated Series (1992-1997), while working on this show, which may be the reason why both shows shared many of the same writers. With the exception of Greg Weisman, Cary Bates and Lydia Marano, all the writers on The Goliath Chronicles wrote for X-Men. Jan Strnad, Julia Lewald, Mark Edward Edens, Brooks Wachtel, Len Uhley, and Len Wein wrote multiple episodes of X-Men, while Steve Cuden and Adam Gilad (who had written four episodes for Gargoyles) wrote one X-Men episode each.

Greg Weisman contractually had a consultancy credit during this time but he waived it, feeling he "hadn't made any real ADDITIONS to the content of TGC." Ultimately, Weisman felt the only contributions he made to The Goliath Chronicles were negations, writing that there were things "you didn't see on the screen, because I advised against it. Giving me credit for what you did see seemed unfair, both to me and to the people who actually did the work." [8]

Despite this, a piece of dialogue from the Chronicles episode "The Dying of the Light" was adapted into the SLG issue "Bash". Greg Weisman felt that "a nod to one of the times they got things right was a nice tribute to all the hard work that the TGC crew put in, with little thanks or reward." [9]