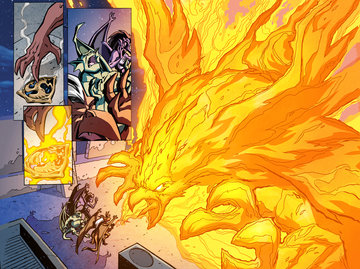 The Phoenix is a time-traveling magical entity which takes the form of a gigantic fiery bird.

At some point in time, the Phoenix was bound inside the Phoenix Gate by someone. [1] There it resided, being controlled and used to move through space and time by whomever held the Gate.

In 1996, Goliath released the Gate into the timestream without a mind to control it. A few months later, the Phoenix Gate appeared in front of Brooklyn. When the gargoyle touched the Gate it began to dissolve and the phoenix exploded free and swallowed Brooklyn, transporting him to Scotland in the year 997. ("Future Tense", "The Gate")

After the Battle of Rathveramoen, the phoenix appeared once again to whisk Brooklyn, Mary, and Finella through time. For the next forty years, the phoenix carried Brooklyn through time, before finally returning him back to Manhattan forty seconds after his departure, along with Katana, Nashville, Fu-Dog, and their egg. ("Phoenix")

The phoenix appears as a gigantic bird of flame. Apparently it lived inside the Phoenix Gate. The origins of this creature are still unknown.

Note: This character has not spoken, therefore it does not have any lines.

After Cosmos' defeat, Angela, Kid Flash, Aqualad, Zatanna, Captain Marvel, Wonder Girl, Spider-Man, Blue Beetle, Wolf (Not to be confused with the Pack member of the same name) and a detained Dr. Octopus appear to be trapped in Ancient Egypt.

Angela is more hopeful due to information that Brooklyn and Katana gave her before The Team were first sent in time. The Phoenix then arrives with a younger version of the two gargoyles and Fu-Dog.

Angela tells them not to give up in returning home and refraining from giving away further info other than the departure date July 2nd, 2016. The Phoenix returns to transport The Team back to given time at 23:16.

The Phoenix was a mythical bird, said to live in a remote part of Arabia. According to legend, every five hundred years (or 1461 years, depending on which version of the story you read) the Phoenix would build a nest out of rare spices, set it on fire, and perish in the blaze, after which a new Phoenix would arise from the ashes of the old one.