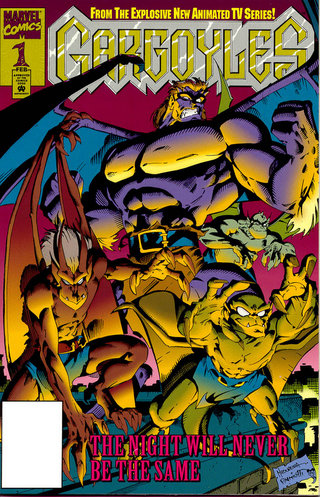 "Fiends in High Places" is the first issue of the non-canonical Gargoyles comic book published by Marvel Comics. It was released in February, 1995.

Elisa goes undercover to work at a construction site where the workmen have been attacked by a gargoyle-like creature late at night. When she's attacked by the creature the following night, Goliath rescues her, and they notice that the creature appears to be a robot. They immediately begin suspecting that it is, in fact, a Steel Clan robot, and suspect Xanatos. When they encounter it again the next night, they discover that it's really Demona wearing a robotic suit of armor which Xanatos has made for her. After a brief scuffle, Demona captures Elisa in the hopes of luring Goliath back to Xanatos' lab aboard a ship which has been docked in the harbor. Her plan is to kill him there, but Goliath and Elisa manage to destroy the laboratory and release several abducted workmen.

The reason the workmen had been working at night is because a company called R.T.C. had decided it wanted its new corporate headquarters completed in just a few weeks, and had hired construction crews to work around the clock. Using the Internet, Lexington discovers that R.T.C. is owned by Xanatos Enterprises, and that Xanatos deliberately orchestrated the entire situation in the hopes of luring the gargoyles in to investigate.

The reason Demona had been abducting the workmen was for Xanatos to use in his experiments, and also to lure the gargoyles to him. Although Demona had wanted to kill Goliath, Xanatos' plan was to use him in his experiments. In the end, Xanatos' head of the "Special Projects" division of Gen-U-Tech, Dr. Phobos (the comic-book counterpart to Dr. Sevarius from the canon material), realizes that he can accomplish his goals without a gargoyle.

Xanatos' scientists had developed a new weapon called a Neurophager, similar to a laser gun, but apparently more powerful. However, this technology caused Steel Clan robots to short circuit, which is why Xanatos needed Demona to work for him instead.

When some of the workmen who had witnessed the attacks tell police about the gargoyle-like creature, many of the officers mock them, causing the remaining witnesses to remain silent, and most of the workmen to stop coming to work altogether. This is somewhat consistent with one of the themes of the canon material, that people will immediately dismiss someone as "crazy" without hearing them out, as Greg Weisman has stated was deliberately done in "City of Stone" Part Three. [1]

This issue contains a scene in which Demona becomes upset when she realizes Elisa is still alive for the first time since "Long Way To Morning" - a scene which is conspicuously missing from the canon material.

This issue also gives a new dimension to Elisa's psychology and her reasons for not telling Matt about the gargoyles. According to her, another reason (besides the one she gave in "Revelations") is because although Matt is obsessed with proving the gargoyles are real, she feels even he wouldn't believe in an ancient race that turns to stone during the day and was put to sleep for a thousand years by a magic spell. This is consistent with Matt's reaction in the canon episode "Revelations", in which (even after finding out about Elisa's gargoyle connections) he still cannot understand why she brought him to the top of the Clock Tower to show him "statues".

This issue introduces Dr. Phobos, who is used as the comic-book counterpart to the canon material's Dr. Sevarius.

The robotic armor Demona wears bears some resemblance to the suit she later wore in the canon episode of the TV series, "The Reckoning".

Unlike most comic books, this issue's (and future issues') narrator is not an omniscient narrator, but Elisa Maza. This is somewhat inconsistent, in that the issues also depict events which Elisa cannot possibly know about, such as private meetings between Xanatos and Demona.

Although this is the first issue, it clearly takes place after the events of "Long Way To Morning", well after Elisa meets the gargoyles, moves them to the Clock Tower, and so on. A short narration is given to catch the readers up to speed, similar to the one given in "Nightwatch", the first issue of Gargoyles' SLG series.

Since Demona is surprised to see Elisa still alive, and since she did not act surprised the first time she saw her alive again in the canon material in the episode "Reawakening", it can be concluded that this issue must take place some time between the canon episodes "Long Way To Morning" and "Reawakening" - both of which are in the first season of Gargoyles. Noteworthy is the fact that this issue mentions Xanatos' experiments on human test subjects, which were not revealed in the canon material until Season 2.

This, and future issues make specific references to events which took place in the canon TV series. These references are present not just in the characters' dialog, but also in comments and explanations from the writer.