From GargWiki
(Redirected from Vinnie)
Jump to: navigation, search 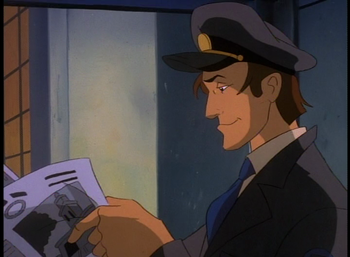 Vinnie Grigori is a New Yorker who has encountered the gargoyles extremely often.

The first time Vinnie encountered the Manhattan Clan was the night after the gargoyles awakened; Lexington spotted Vinnie out on a motorcycle ride, and swooped down to take a closer look. Vinnie, alarmed at the sight of the little gargoyle, fell off his motorcycle, and when Lexington subsequently made an effort at riding it, he inadvertently drove it into a wall and destroyed it. ("Awakening Part Three") When Vinnie reported the loss of his motorcycle to the authorities, they refused to believe his story about gargoyles, considered him to have been drunk, and took away his driver's license.

At that time, Vinnie was a security guard for Cyberbiotics, on board Fortress-1. The night after his motorcycle disaster, he met Goliath and Demona during their raid on the air fortress, and was frightened enough to pass out in shock at the sight of the two gargoyles. Vinnie escaped the destruction of Fortress-1, but was now out of a job. ("Awakening Part Four") He got another security job at Gen-U-Tech Systems, but when Goliath kidnapped Sevarius on a night that Vinnie was on duty, he was promptly fired again. ("The Cage")

Vinnie had by now had enough. He had Mr. Acme make a special pie-firing gun for him, which he named "Mr. Carter", and with it, hunted Goliath down and finally fired "Mr. Carter" at him, splatting the gargoyle with a banana cream pie. He then triumphantly walked away, while Goliath stared bewilderedly after him. ("Vendettas")

Nevertheless, only two months passed before he'd randomly encounter the Manhattan Clan again, this time almost being smashed by a falling chunk of the Hunters' Airship steel hatch while out for a nighttime stroll. [1] Days later, Vinnie was one of the New Yorkers interviewed by Nightwatch after the gargoyles were revealed to the world, and told his story about his revenge on Goliath to the reporters. ("Nightwatch") Taro, watching in Japan, was intrigued and offered Vinnie a security job with his company. John Castaway also learned about Vinnie's exploit, and eagerly recruited him for the Quarrymen. When Vinnie quickly got a taste of Castaway's true nature, however, he decided that he wanted no part of the Quarrymen's mission, and saved Goliath and Elisa from Castaway's wrath. Giving the two his best wishes and a warning to be careful, he then left for Japan to accept Taro's offer. ("The Journey") [2] It is more than likely that he will soon discover the Ishimura Clan there. ("The Lost")

In 2014 Vinnie will be present at the first gathering of gargoyle sympathizers in five years. Demona will also be present. Her reasons and intentions are unknown. [3]

1994. October 5. Shocked by the appearance of Lexington gliding over his shoulder while riding his motorcycle. Watches as the curious gargoyle accidentally trashes the motorcycle. ("Awakening Part Three")

October 6. Encounters Goliath and Demona during his guard duty of Fortress-1. Passes out at the sight of Goliath. Demona destroys the ship and Vinnie loses his job. ("Awakening Part Four", "Awakening Part Five")

October 26. His driver's license is revoked when he claims gargoyles smashed his motorcycle into a wall. The judge thought he was intoxicated. ("Vendettas")

December 20. Worked as a guard at Gen-U-Tech when Goliath kidnapped Sevarius. Vinnie, who was oblivious to what happened, is fired again. ("The Cage")

1996. August 1-2. Receives Mr. Carter the pie-gun from Mr. Acme. Follows Goliath and Hudson around the city as the two are pursued by Wolf and Hakon. Oblivious to the danger the gargoyles are in and intent on "creaming" Goliath, Vinnie continually gets sidetracked while talking to "Mr. Carter" about his bad luck with the gargoyles. Finally confronts the gargoyles at a junkyard, and shoots Goliath in the face with a banana-cream pie before walking away and inexplicably humming the Gargoyles theme song. ("Vendettas")

October 24. While on a nighttime stroll, Vinnie is nearly smashed by a falling piece of the Hunters' Airship that was ripped off by Goliath. [5]

October 29. Interviewed on Nightwatch. Boasts that he hunted a gargoyle down and got revenge. Recruited by John Castaway into the Quarrymen and attends a meeting. ("Nightwatch") The same night, he's offered a job by Taro in Japan. [6] Castaway convinces Vinnie to help track down Goliath and Elisa Maza and they corner them in the ruined clock tower. Vinnie is disturbed when Castaway attempts to kill them and comes to their defense, giving Goliath enough time to recover to defeat Castaway. Goliath thanks him and then confesses to Elisa that he isn't sure who "that guy" is. ("The Journey")

November 8. In Tokyo, Vinnie tries to find the train to Ishimura. ("The Lost")

The character of Vinnie originated as the dumb Gen-U-Tech security guard in the episode "The Cage". Jeff Bennett was cast in the role, and performed an imitation of John Travolta's character Vinnie Barbarino from the TV series Welcome Back, Kotter. The character impressed the show's staff and he was later brought back for the episode "Vendettas" as the nameless schlub whose life the gargoyles had affected without ever realising it. He was named Vinnie after Travolta's character, and his pie-flinging gun Mr. Carter was also named after the character of Mr. Kotter from the same show. [9][10]

When Vinnie appeared in the episode "The Journey" of The Goliath Chronicles, which was the last episode that Greg Weisman wrote for the series, Vinnie became a stand-in for Greg himself. Vinnie's departure for Japan was an allusion to Greg's own departure from the show. [11]

Following the cancellation of the show and the opening of the Ask Greg website, Greg Weisman was asked what Vinnie's last name was and jokingly replied that it was probably Gregarino, a reference both to Vinnie's namesake Vinnie Barbarino and to Greg's own name. [12][13] Despite the flippancy of the response, the name stuck and it was the name used by the fandom until the SLG comic book series revealed that his canon surname was Grigori. [14][15]