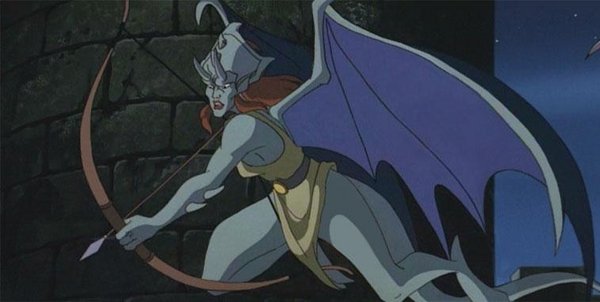 Ophelia is a member of the Avalon Clan. Ophelia is also second-in-command of the clan. [1]

The egg containing Ophelia was laid in the Wyvern Clan rookery in 988 and was due to hatch in 998. Due to the Wyvern Massacre however, Princess Katharine, the Magus, and Tom were forced to take all the rookery eggs away in 994. The next year, on September 28th 995, they took the eggs to Avalon. ("Avalon Part One") Because of the difference in the flow of time there, Ophelia did not hatch until 1058.

Princess Katharine, the Magus and Tom raised the "Eggs" as their children and Ophelia grew up on Avalon, with her rookery brothers and sisters, in peace and isolation from the world. By 1995, she had become romantically involved with Gabriel.

She participated in the defense of Avalon from the Archmage and his allies in 1995 and was severely wounded after being shot with a laser cannon by her rookery mother Demona. ("Avalon Part Two" & "Avalon Part Three") In 1996, when Oberon arrived to reclaim Avalon, Ophelia aided Katharine, Tom and Elisa Maza in crafting the iron bell that defeated him. However, she raised her doubts about whether her clan truly had the right to battle against Oberon, since he was merely seeking to regain what was rightfully his. ("Ill Met By Moonlight")

After Angela, her rookery sister, departed the island in 1995, Gabriel, who was the clan leader, promoted Ophelia into Angela's position as second-in-command of the clan. [2] She and Gabriel are mates and she continues to live on Avalon. [3] Assuming she is alive, Ophelia is expected to lay an egg in 2008. [4][5][6]

It is likely that Ophelia will still be alive in 2198 (less than a decade will have passed on Avalon between 1996 and 2198). [7] Greg Weisman has hinted that there is a strong possibility that Ophelia would appear in the Gargoyles 2198 spin-off. [8]

Ophelia's most distinctive feature is her large crest and two pointed horns over her brows. She has only two toes on each foot, instead of the usual three. She also has a distinct wing structure seen on no other gargoyle in the series, and two small spikes on each forearm. Her skin is turquoise and her hair brown.

Ophelia is named after one of the two leading female figures in William Shakespeare's Hamlet. The Ophelia of Shakespeare is the daughter of Polonius, the chief advisor to King Claudius of Denmark, and sister to Laertes. She and Hamlet are at first lovers, but their romance ends after Polonius orders Ophelia to stop seeing Hamlet and Hamlet becomes too focused on his pursuit of revenge upon Claudius to have time for love any further. After Hamlet treats her savagely in the "Get thee to a nunnery!" scene and later on kills her father, Ophelia goes mad, walks about singing and handing out flowers to everyone, and at last falls into a river and drowns. It is to be hoped that the Ophelia of Gargoyles will not suffer a similar fate.