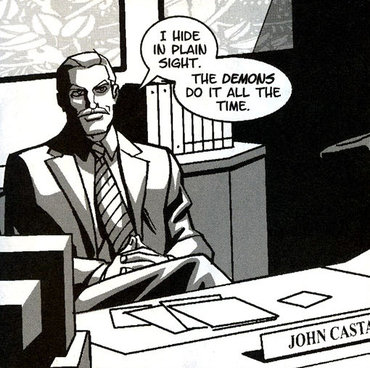 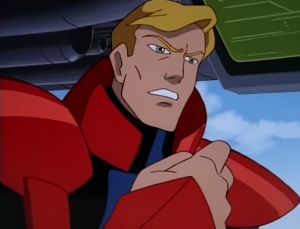 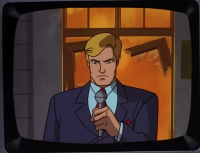 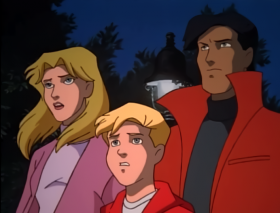 John Castaway is the leading member of the anti-gargoyle organization called the Quarrymen. He is an intelligent and charismatic hatemonger.

John Castaway was originally Jon Canmore, a Hunter and the youngest of the three Canmore siblings. He has since forsaken the mask of the Hunter for a Quarryman hood, although his Quarryman uniform does bear a unique insignia on its chest that combines the Quarryman 'Q' symbol with the three diagonal slashes representing the Hunters.

Other aliases that Castaway has assumed include Jon Carter, a reporter for WVRN.

Born on November 26th, 1972, when he was a small boy, Jon Canmore accompanied his older siblings, Jason and Robyn, and father, Charles Canmore, to Paris in 1980. [1] On the night of September 28th, he saw his father's death at Demona's hands at Notre Dame Cathedral. He accompanied his siblings on the Hunters' self-appointed quest to destroy Demona and any other remaining gargoyles, but his heart was never truly in it, at first.

When the Hunters came to New York in 1996, Jon took on the alias of "Jon Carter", a reporter for WVRN. In that role, he visited Castle Wyvern, ostensibly to interview Xanatos about the castle for a segment on New York's "unique skyline", but actually to search for traces of the gargoyles; he found a piece of stone skin in the courtyard during his visit. He afterwards accompanied his siblings during their battles with Goliath and his clan, although hesitantly; he felt that while Demona was indeed an enemy, the other gargoyles might not be, and that perhaps he and his family were doing the wrong thing by hunting them. However, he was a weak man at heart, and was never able to muster up enough courage to break with the Hunters’ tradition, he allowed Jason to talk him down, and continued the hunt even though he knew in his heart that it was wrong.

After the Canmores destroyed the clock tower, Jon was sent out on his sky-sled to shoot down any survivors before they could escape. However, when he saw the clan struggling away from the ruins, and how they were caring for their wounded (Hudson and Lexington), he could not bring himself to attack them, and let them flee. But his habit of weakness returned; when Jason and Robyn instructed him to publicly frame the gargoyles for the destruction of the clock tower in his "Jon Carter" persona, thus exposing them to the public and ensuring a city-wide gargoyle hunt, he yielded to their demands without an argument, and did it.

When Goliath attacked the Hunters at the dam, Jon stayed out of the fighting, feeling uncomfortable with it but, unlike Elisa, making no effort to stop it. When Goliath sent Jason over the dam, however, Jon was horrified. Overcome with grief and guilt, he felt convinced that his sparing the gargoyles at the clock tower had brought about Jason's death, and became consumed with an almost-insane hatred for the clan, which became all the more intensified after he saw the videotape of Demona's plans to destroy humanity in "Operation Clean Slate". He pursued her to Saint Damien's Cathedral, but when Goliath's clan arrived there as well, turned on them. He and Robyn were defeated by them, however, and Goliath was about to kill him when Elisa and Jason arrived at the cathedral. Jason urged Jon to give up his hatred for the gargoyles, but Jon refused, and tried to shoot Goliath. Jason threw himself in the way and took the shot for Goliath, severing his spine. Jon, horrified at what he had done, tried to face his guilt, but was unable to do so. Crying out "What have I - what have they done?" in an echo of Demona at Castle Wyvern a thousand years before, he vowed revenge, and left the cathedral in anger. ("Hunter's Moon Part One", "Hunter's Moon Part Two", "Hunter's Moon Part Three")

No longer having access to the full resources of the Canmore family, Jon made contact with the Illuminati, receiving their help in his war against the gargoyles. ("Invitation Only", "Estranged") He changed his name to "John Castaway", and took command of the Quarrymen. ("Nightwatch") 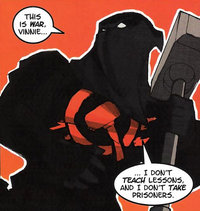 Castaway in his Quarryman uniform

Castaway first employed Banquo and Fleance to provide him with experienced muscle, and then recruited a number of frightened New York citizens to join him in battling the gargoyles, including Vinnie. In his first attack upon the gargoyles, he cornered Goliath and Elisa at the ruins of the clock tower, and came close to killing them both, but was prevented from doing so by Vinnie. Castaway escaped, however, vowing to continue the hunt. ("Nightwatch", "The Journey")

In December 1996, Jason and Robyn discovered that Castaway was really their brother upon viewing a television commercial he appeared in advertising the Quarrymen. Robyn confronted him at the Quarryman Brownstone and attempted to talk him out of his mad course, or at least encourage him to lay low to avoid arrest. Castaway dismissed her, saying "If the Hunter's not hunting demons, I've got no time for her." ("Estranged")

Castaway will continue to pose a threat to the gargoyles in the future. By 2198, Castaway's descendants will presumably still be anti-gargoyle and connected to the Quarrymen, and also on poor terms with the Monmouths, descended from Dingo and Robyn Canmore, as a result. [2][3][4]

As John Castaway, Jon has grown a mustache and changed his hairstyle, along with altering his traditional Scottish brogue to an English accent. However, he is prone to slipping into the Scottish when he loses his temper. At heart, Jon Canmore is a weak man. While his brother, Jason, was strong in his prejudices and strong enough to change once he was proven to be wrong, Jon was a follower without the conviction to stand up, take responsibility for his life and say this was wrong. [5] When he accidentally shot and crippled his brother, he lacked the inner strength to take responsibility for his actions and instead fled, vowing vengeance after saying the familiar words "what have I... what have they done?!" just like Demona before him. Indeed, Greg Weisman has intent to build John Castaway into the anti-Demona. [6]

While a Hunter, Jon briefly used a robotic falcon.

His Quarryman uniform is similar to the rest of the Quarrymen's, but with one noticeable difference. The scars of the Hunter are emblazoned behind his Quarryman 'Q.'

At the end of "The Journey", John Castaway slips back into his natural Scottish accent as he taunted Goliath. [7] Following this last episode of The Goliath Chronicles that Greg Weisman was involved in, no connection was ever made between Castaway and Jon Canmore or the Hunters, save for an oblique reference by Goliath to "an ancient hatred". ("Angels in the Night") Apart from those two scenes, The Goliath Chronicles treated Castaway as a separate character, an industrialist who ran the Castaway Corporation.

Following the formation of the Quarrymen and the skirmish at the clock tower, John Castaway continued to hunt the clan and was arrested for usage of cannons in the city. ("...For It May Come True")

After making one final attempt on their lives during early 1997, Castaway was exposed for the criminal he was and arrested again. ("Angels in the Night")

In contrast to his behavior in "Invitation Only" and "Estranged", this version of the character didn't show restraint in his pursuit of the gargoyles and would risk endangering bystanders to achieve his goal.

The name Jon Carter may have been in reference to John Carter of Mars, the main character from the Barsoom series of novels by Edgar Rice Burroughs.