From GargWiki
(Redirected from The Journey (SLG))
Jump to: navigation, search 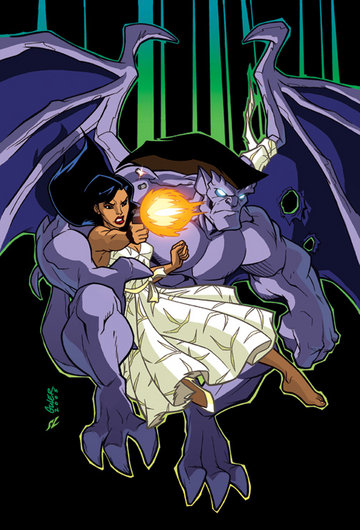 For the TGC episode, see The Journey (TGC)

"The Journey" is the second issue of the Gargoyles comic by SLG, and Chapter Two of the Clan-Building story arc. It was released on December 13, 2006. The issue was reprinted in Gargoyles: Clan-Building, Volume One. It was adapted into a Radio Play and performed at the Gathering of the Gargoyles in 2004.

Stone by day, warriors by night, the Gargoyles were betrayed by those they had sworn to protect. Now here in modern Manhattan, the spell that held them frozen for a thousand years is broken, and the Gargoyles live again! In this issue, debate over the Gargoyle menace rages on New York's airwaves, while the shadowy Quarrymen take matters into their own hands. Will an injured Goliath be able to get himself and Elisa to safety before he becomes the Quarrymen's first victim? Based on the popular Disney/Buena Vista animated television series of the 90s, GARGOYLES is back ten years later with original canon stories from series creator Greg Weisman.

Goliath and Elisa are pursued by John Castaway and a group of Quarrymen intent on their destruction. Goliath is unable to glide on his injured wing, and so is forced to jump from building to building with Elisa in his arms. They end up at the ruined clock tower and take out most of the Quarrymen there, but Castaway is able to get the jump on them and subdues both Goliath and Elisa. He is about to kill Goliath, but Vinnie stops him in time, fighting Castaway until Goliath can recover and retaliate. Outnumbered, Castaway escapes but promises to return.

Lexington and Fox agree to form a truce.

Xanatos declines to answer a phone call from Mr. Duval of the Illuminati.

Broadway and Angela express their love with a kiss while Brooklyn watches dejectedly.

Goliath and Elisa say they have no regrets about their chosen path together.

The much-delayed second issue of the Gargoyles comic was finally brought out in December, to conclude the adaptation of "The Journey" begun in #1. As with #1, the bulk of its content is almost identical to that of the television episode, but again, there are a few new elements incorporated into the story.

When we left off, Goliath and Elisa were being pursued by the Quarrymen, and Goliath had been shot in the wing. Now that Goliath is unable to glide (until the next day's stone sleep heals his injuries - if he's fortunate enough to survive until then), our heroes' struggle to escape is all the more dangerous - especially with Castaway himself joining the chase.

While the Quarrymen continue their hunt, the fallout over the revelation of the clan to the world is playing itself out on a less action-based level. Travis Marshall is hosting a debate on the gargoyle issue on Nightwatch between Macbeth (in his Lennox Macduff identity) and Margot Yale. It is a pleasure to report that Macbeth takes the pro-gargoyle side; he had been established increasingly through Season Two of the television series as a figure with noble qualities as well as flaws, and now he becomes an ally to them. Margot, not surprisingly, is as anti-gargoyle as ever; the best that can be said about her stance is that she advocates that the gargoyles be placed in captivity rather than exterminated.

In the course of the debate, we get glimpses of the rest of the clan (who had stayed behind in the Eyrie Building). Hudson is watching the debate on television, but the other members take a more active role, in serving as a contrast to Margot's claims about them (a particularly nice touch). When she claims that the gargoyles are a danger to the children in the city, we see Alex happily playing with Bronx and Lexington in the nursery; when she scoffs at Macbeth's belief that "these creatures have human thoughts and emotions...", we see Angela, Broadway, and Brooklyn in the library, displaying these features.

But these scenes introduce us to other developments. Lexington still bears a grudge against Fox, going back to "The Thrill of the Hunt", but agrees to put it aside at her request for Alex's sake. Broadway and Angela have clearly become a couple, and Brooklyn is saddened that Angela had chosen Broadway over himself for her future mate. And most intriguingly of all, Xanatos learns from Owen, while looking in on the nursery scene, that a certain Mr. Duval, a member of the Illuminati Society (which we haven't heard anything from since "Revelations"), wants to speak to him on the phone - and decides to return his call later and play with his son instead. It is doubtful that the timing of Mr. Duval's request for a conversation with the gargoyles' new patron so soon after their public exposure is a coincidence, and I look forward to seeing how this element will play out in future issues - especially since Xanatos admits that it is not advisable to "keep the Illuminati waiting".

Meanwhile, Goliath and Elisa wind up taking shelter in the ruins of the Clock Tower, there to face Castaway in a climactic showdown. What saves their lives in the end is Vinnie, who here, in one of the comic's most effective moments, goes from the inept klutz of "Vendettas" to a figure of heroic stature. He increasingly has his doubts about the rightness of Castaway's mission, and finally, when the Quarryman leader makes it clear that he intends to actually kill both Goliath and Elisa, stands up to him, saying "This isn't right" - an example of how a few simple words can, in the right context, attain considerable power and eloquence. Vinnie's act buys time enough for Goliath to recover and force Castaway to retreat - though, judging from the latter's defiant cry of "Dream of me, Goliath!", this is far from the last time that we shall hear from him again.

In the aftermath, Vinnie parts on now-friendly terms with Goliath and Elisa, heading off to Japan; Goliath and Elisa speculate that he may encounter the Ishimura Clan there (given Vinnie's track record, I would certainly not be the least bit surprised if he does!). Goliath muses afterwards upon the journey that lies before them, with Elisa standing by his side, loyal as ever. Between her and Vinnie (and Macbeth on Nightwatch), it is clear enough that Castaway and Margot are not the final say on how humanity will respond to the gargoyles - that there is still hope. And that is what truly matters.

"That means so much coming from you Fox." - Fox and Lexington

"It's just not right."
"Traitor!" - Castaway and Vinnie

"Brave words...for a man who hides his face behind a hood." - Castaway and Goliath

"Honestly, I was never quite sure." - Elisa and Goliath

"Funny. I feel the exact same way." - Goliath and Elisa

Goliath's wing is still injured, having been hit by a bullet in the previous issue, "Nightwatch".

Margot Yale is introduced by Travis Marshall as "advisor to the NYPD Taskforce". She appears in this capacity in the following issue, "Invitation Only".

David Xanatos refuses to accept a call from Duval, a prominent member of the Illuminati. It is revealed in "Invitation Only" that Duval intended to tell Xanatos to accept an invitation to the White House on Halloween, a visit that he makes during "Masque" and "Bash".

Vinnie receives a job in Japan during this issue. He later appears on his way there in "Rock & Roll", and in Japan in "The Lost", the second issue of Gargoyles: Bad Guys.

As with "Nightwatch", the previous issue, "The Journey" is based on the first episode of The Goliath Chronicles, also called "The Journey". However, there are some noteworthy differences between this issue and the television episode. Among these are:

The script also brings more Shakespeare into Gargoyles, when both Broadway and Brooklyn quote from Romeo and Juliet in the library scene. (Though this appeared in the television episode as well.)

Vinnie's departure for Japan and urging Goliath to be more careful - "[since] I'm not gonna be here next time to save your cans" - was originally an allegory (of a sort) for Greg Weisman's departure from the series (the televised version of "The Journey" being the last episode that he worked on). [1] It loses some of that element in the new context, however, where Greg is now returning to the series in the comic. (In light of how Vinnie is almost a surrogate for Mr. Weisman here, it is amusingly appropriate that Goliath admits to being uncertain over who he is.)

Cover/Interior inconsistency: The cover shows Goliath's left wing seriously injured, whereas it is actually his right wing throughout the interior of the comic.