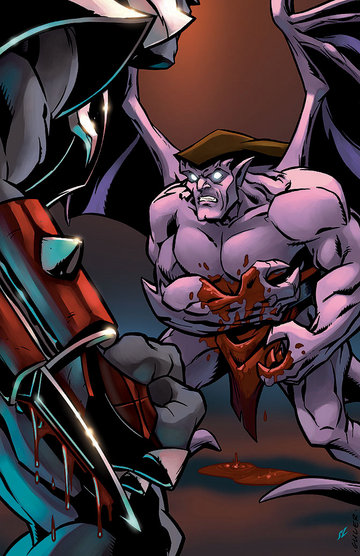 The Clan-Building storyline continues in chapter five: Bash. Goliath is down for the count, surrounded by Thailog and the clones. Can the other gargoyles reach him in time? Whose side will Delilah choose? Who else will learn the gargoyles' secrets? And what exactly is David Xanatos up to at the White House?

The Halloween Masque at the Eyrie Building is effectively crashed by Thailog and the Clones. Goliath is out of commission, bleeding heavily from the wound Thailog has inflicted upon him. Angela, Broadway, and Lexington go outside to find Thailog standing over Goliath, and attack him, but are tackled by the clones at Thailog's command. Brooklyn, Elisa, Hudson and Bronx later join the fray. Elisa kneels by Goliath while the gargoyles fight. During the melee, Thailog collects blood samples from all the Manhattan Clan gargoyles and Elisa by slashing them with his hidden daggers. The fight ends when Delilah arrives, and decides to go back to the Labyrinth with Malibu, Hollywood, and Burbank, while Brentwood leaves with Thailog. The two later arrive at Nightstone Unlimited to give the eight collected blood samples to the waiting Doctor Sevarius.

Elisa apologizes to Morgan for using him.

Xanatos talks to Quincy Hemings at the White House, and receives his first assignment from the Illuminati from him. The Illuminati ranking system (One number one, two number two's, etc...) is established.

Hudson confesses to Jeffrey Robbins that he is a gargoyle, though Robbins had already figured it out.

Free will amongst the clones is brought up once again. Brentwood, who sits on the sidelines during the fight, is especially contemplative of the subject, and chooses to stay with Thailog, much to Lexington's chagrin and embarrassment.

Brendan is at odds with Margot, and while passing a window, sees the gargoyles fight. He alerts Dr. Sato to Goliath's injury.

Dr. Sato arrives and tends to Goliath. The others watch on, and Goliath and Elisa confess their mutual love.

A relationship between Delilah and Malibu is hinted at, and Brooklyn once again feels snubbed.

Shari arrives at Nightstone, volunteering to take the job of Thailog's executive assistant. Both Thailog and Shari reveal themselves to be Illuminati members, 36 and 9, respectively.

"Bash" brings an end to the first entirely new story of the Gargoyles comic book. In typical Gargoyles fashion, it provides a satisfactory conclusion to the immediate adventure, but does so in such a way as to open the door to more adventures to come.

We left Goliath as he was subjected to a surprise attack by Thailog. Fortunately for him, the rest of the clan (including Elisa) suspect that something is amiss and rush out to face Thailog and his Clones. Even Hudson returns from Jeffrey Robbins' house, bringing Bronx with him. In the ensuing battle, Thailog proceeds to wound all the other members, including Elisa (interestingly enough, his attack comes on her immediately after she announces that she's one of the clan, with the remark "Good to know"), taking care to slash each one with a fresh knife from his enormous wrist-guards. This turns out to have greater significance at the end...

The battle is brought to an end with Delilah's arrival, and leads to what has to be her finest hour in the comic to date (even if she has only appeared in two issues prior to it, and one episode of the television series). She shows herself to be ready to speak her mind in no uncertain terms. When Angela urges her not to listen to Thailog, Delilah says "Is that an order, Angela? Or am I truly free to make my own choices?" She then sharply rebukes Goliath for taking her to the party when he knew that he had no true feelings for her, but proceeds to speak the same way to Thailog. She then decides to return to the Labyrinth, the only place where she has "felt truly free".

Three of the other four Clones decide to go back with her, but Brentwood elects to stay with Thailog, having become impressed with his cunning. (Intriguingly enough, Brentwood is the only one of the four male Clones who does not participate in the battle, merely watching from the sidelines.) Goliath (perhaps pondering Delilah's earlier words) accepts this, saying "Choice must extend to those who choose unwisely". (As an amusing side-note, Lexington is particularly appalled at Brentwood's decision, protesting, "You're really making me look bad.")

The battle has also helped Elisa realize (alongside the disastrousness of the Double Date even before Thailog's arrival) that she and Goliath really are meant for each other and will have to accept it. We see her tending his wound with concern for him, urging Dr. Sato to do whatever he can to help, and even give the wounded gargoyle a second kiss (the first being in "Hunter's Moon Part Three").

Thailog, as ever, makes a great villain, amused to get the upper hand over Goliath again, clearly enjoying the fighting and the scheming, and making a number of his usual quips (among the highlights of these being "Why does everyone insist on pitching free will to my minions?" and, in response to Brentwood's volunteering to stay with him, "Finally, someone making sense!"). But at the end, he shows all the more how much he takes after Xanatos, as he reveals his real goal during the battle; his attacks on the gargoyles and Elisa had gathered fresh DNA in their blood, which he turns over to Sevarius for new experiments. It will be interesting to see what Sevarius intends to do with these; most likely it will be something even grander than the Clones from "The Reckoning".

That is not the only new mystery brought into the comic, however. Xanatos's meeting with Quincy Hemings, the Chief Steward at the White House and also a high-ranking member of the Illuminati, ends with his being given his first assignment on the Society's behalf; for now, its nature is a secret, but future issues will no doubt reveal its purpose. Also connected with the Illuminati, we discover at the end that both Thailog and the mysterious woman in the Labyrinth (whose name, it turns out, is Shari) are also in the Illuminati, that Shari outranks Thailog, and that she's decided to become his executive assistant. It will be interesting to see how things will go between them from there.

Finally, the gargoyles, despite their perilous situation, are continuing to deepen their contacts with the human world. Hudson admits to Jeffrey Robbins that he's a gargoyle, only to learn that Robbins had figured it out on his own. And Dr. Sato is called in to help Goliath's injury; I look forward to seeing what his response to meeting them face-to-face under such circumstances will be.

And so we come to the end of the first new Gargoyles story in ten years. Already, the comic has provided us with a far more effective continuation of the gargoyles' adventures from "Hunter's Moon" and "The Journey" than The Goliath Chronicles were. If the stories to come continue to be of this caliber, then the comic will deserve a long life (and let us hope that it will have one). Also (though, hitherto, I have not commented on the art in the comic book series), we have the best art in an issue of Gargoyles to date, from guest fan-artist Karine Charlebois; she will also be drawing the upcoming Bad Guys spin-off (something which bodes well for it).

"I love you too." - Goliath and Elisa

On the first page, Judge Roebling is talking to two women who bear a strong resemblance (both in appearance and attire) to Mary and Finella from "Avalon Part One". Is this just a coincidence, or is there a deeper significance? (We know that Greg's original plans for the series involved Brooklyn bringing these two forward in time via the Phoenix Gate in TimeDancer, and that in "Phoenix", they beg Brooklyn to take him with them when the Phoenix comes for him. According to Karine, the two women were meant to look twenty years older than in "Avalon" Part One, though she forgot to draw them that way; in Greg's old plans, Mary and Finella were brought by Brooklyn to the 1970s. This strengthens the possibility that these two guests really are them.)

The conversation also reveals more about the Illuminati's internal structure. There are 36 ranks, each one having a number of members equal to the number of the rank: one Number One (presumably Peredur), two Number Twos (Duval and Quincy Hemings), all the way down to thirty-six Number Thirty-sixes - which means that the total Illuminati membership would be 666, the Number of the Beast in the Book of Revelation (13:18).

Brooklyn finally dons his costume, an obvious parody of Superman's outfit (with a letter G on his chest and his wings serving as a cape).

In a small continuity nit, Broadway's "Cowardly Lion" costume has suddenly changed from a mere mane and nose (in #4) to a full body-suit.

Cover/Interior Inconsistency: Here the cover implies that Goliath was stabbed with a blade from Thailog's right bracer, but the interiors clearly show a knife from his left bracer was used.

Jeffrey Robbins' conversation with Hudson echoes the scene in "The Dying of the Light" where Hudson discovers that Robbins had figured out that he was a gargoyle on his own. Robbins even, as per The Goliath Chronicles, describes Hudson as having a slight smell of "old leather and concrete" about him. Greg Weisman said that the particular scene was not one of his, but as it was a fan-favorite he felt that "a nod to one of the times they got things right was a nice tribute to all the hard work that the TGC crew put in, with little thanks or reward." [1]

Brendan (still in a bad mood over Margot nagging him) is the one who spots the fight between the gargoyles and the Clones and alerts Dr. Sato, something which might also have significance for his later development.

Brentwood's decision to stay with Thailog echoes Lexington's betrayal of the clan in "Future Tense". In the aftermath of the battle, Delilah is standing next to Malibu in a way that suggests feelings between them; could this similarly be an echo to Demona and Brooklyn's becoming a couple in Puck's twisted vision of the future?

Thailog and Sevarius's meeting takes place in Nightstone Unlimited. According to Greg Weisman, Thailog has regained control of the company from Demona (who went into hiding after the events of "Hunter's Moon", and would therefore be unable to prevent him from returning there).