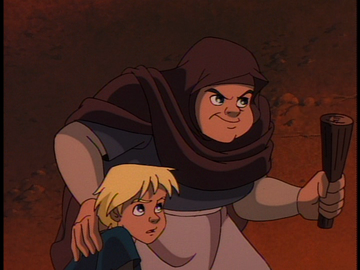 Mary is a Scottish peasant woman.

Mary was born in 966, within a mile or two of Wyvern, Scotland. [1] In 986 she gave birth to Tom. Since no mention is ever made of Tom's father, it is presumed that Mary was widowed sometime between Tom's conception and 994.

Mary and her son were part of a band of peasant refugees in Scotland in 994 and fled to Castle Wyvern to take refuge from Hakon and his Vikings. When Tom befriended the gargoyles of the Wyvern Clan, Mary disapproved, fearing these beings (as did most of her fellow Scots) at the time; her angry words at the Trio and attack on Brooklyn in particular lead to the fight which resulted in Goliath sending the Trio and Bronx down to the rookery. Like the other human occupants of the castle, Mary was captured by Hakon and his Vikings after the Captain of the Guard's betrayal, but rescued by Goliath and his clan. ("Awakening Part One", "Awakening Part Two")

Afterwards, she accompanied her son and Princess Katharine to Kenneth II's court. There Mary became a sort of handmaiden to the Princess and a trusted friend as well. After Constantine murdered Kenneth and seized the Scottish throne, Mary enlisted the help of the noblewoman Finella and together they helped Princess Katharine and "The Eggs" flee to Avalon. When it became clear that the Grimorum Arcanorum could not be taken onto the enchanted island, Mary and Finella volunteered to return to Scotland with it, and to keep it out of Constantine’s hands. Mary sadly parted with her son and went back to Scotland. ("Avalon Part One")

For two years, the two women were pursued by Constantine's men, on orders from him to recover the Grimorum. In 997, however, Brooklyn, on his first TimeDancing adventure, arrived to protect them. He led them back to Castle Wyvern but, unable to get back Goliath's half of the Phoenix Gate, they allied themselves with Constantine's enemies in the Battle of Rathveramoen. Following Constantine's death and the battle's end, the Phoenix appeared and Mary and Finella asked Brooklyn to take them with him. ("The Gate", "Tyrants", "Phoenix")

The Phoenix transported all three of them to the United States in the 1970s. [2] There, Mary, Finella and Brooklyn eventually arranged the alliance between David Xanatos and Demona that led to the moving of Castle Wyvern to the top of the Eyrie Building and the re-awakening of the clan. [3] No doubt, Mary and Finella gave the Grimorum to Xanatos, as well. [4] What happened to them afterwards is as yet unknown, though a woman looking strikingly like Mary was seen at Xanatos' Masque party on Halloween, 1996. ("Bash")