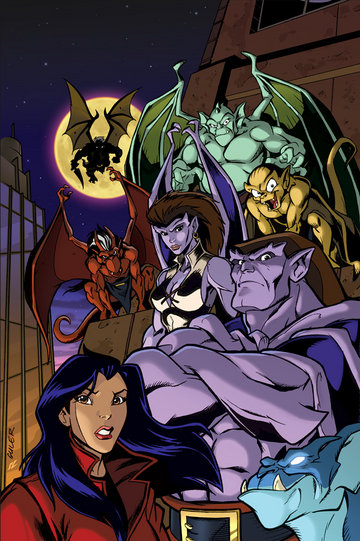 "Invitation Only" is the third issue of the Gargoyles comic by SLG, and Chapter Three of the Clan-Building story arc. It was released on March 28, 2007. The issue was reprinted in Gargoyles: Clan-Building, Volume One. It was adapted into a Radio Play and performed at the Gathering of the Gargoyles in 2007.

It's Halloween in Manhattan! The one night a year the clan can be seen in public without starting a riot. David Xanatos is throwing a masquerade ball atop his castle skyscraper. Expect good food, amazing costumes, and more than a few nefarious party-crashers!

Start of the "Double Date" story. Halloween is fast approaching, and Xanatos and the Manhattan Clan are getting ready for the upcoming Masque at the Eyrie Building. Meanwhile, Elisa is asked on a date by Officer Morgan, then talks to Jason Canmore in the hospital, and decides that Goliath can't give her everything she wants, such as children, and so breaks up with him. She convinces him to ask Delilah to go to the Masque with him. Goliath goes to the Labyrinth to do so, then leaves right before Thailog attacks it.

Duval orders Xanatos to the White House for an Illuminati assignment.

Demona retrieves an Atlantean crystal from within the broken Praying Gargoyle at Saint Damien's Cathedral.

Al tells Shari the story behind the mutates and the clones in the Labyrinth.

Brooklyn attempts to ask Delilah out, but Goliath unintentionally beats him to it.

Castaway tells his Quarrymen to make their presence known on Halloween, but not to carry Quarryhammers.

The first entirely new Gargoyles story in over ten years is finally here. After reading it, I can firmly say that it was worth the wait.

The new story is Part One of one of the most anticipated stories that Greg Weisman had mentioned plans to write in his projected Season Three at "Ask Greg": the Double Date. In it, Goliath and Elisa were to conclude that a gargoyle-human relationship was impossible and decide to see other people; Elisa would go out with either Officer Morgan or Jason Canmore, and Goliath with Delilah. In this issue, we see the first steps towards that story taking place.

I had wondered how Greg would go from Elisa's remark to Goliath at the end of #2 that she had no regrets over the direction that the two of them were going in to her decision that she and Goliath were simply not compatible in a romantic way, at least, in a way that would make her path believable rather than a contrived 180 degree turnabout. Greg made it indeed convincing, however, through a couple of conversations that Elisa has with (appropriately enough) both Morgan and Jason. After a meeting of the Gargoyle Taskforce, Morgan suggests to Elisa that they go out together, and upon learning that she's "involved with someone [else]", expresses his astonishment that she's never mentioned him or introduced him to anyone else in the precinct. Later, when Elisa visits Jason again in the hospital, he comments bitterly about his paralyzed condition, saying, "You need to be with a man who can give you everything you've ever wanted!" Elisa sadly realizes that her original dreams for romance - "a house. A yard. Picnics on Sunday afternoons... children" - can't be realized with Goliath, and seeks him out to suggest that they break up. Goliath is just as upset to hear her say it as she is to say it, but understands what she is saying, and reluctantly goes out with Delilah.

In the meantime, the Illuminati, mentioned briefly in #2 after a long absence, fully return to the gargoyles' story. I was particularly delighted to discover that their representative in this issue is none other than Martin Hacker, whom we had last seen in "Revelations". One of the things that I had most regretted about the Society's long-dormancy in the series was that the discovery at the end of that episode that Hacker was really one of the Illuminati had exciting potential for further development: what would happen now that Matt Bluestone discovered that a former partner of his, whom he had trusted, had been one of "them" all along? And indeed, Matt is still clearly anything but happy to see his old associate, as I had thought.

As the Illuminati's representative, Hacker is handled beautifully in his secret meetings with Matt (over his leadership of the Gargoyle Taskforce), Xanatos (over his Halloween costume party, to which the gargoyles are invited), and Castaway (over his running the Quarrymen). In each meeting, Hacker claims to approve of the character's plans, stating that the Illuminati believe in the same ends that the person whom he meets is aiming for. The fact that Matt and Xanatos's goals are mutually exclusive with Castaway's makes it clear that Hacker is deceiving somebody - and I strongly suspect that, in one sense, he is lying on all three occasions about the Illuminati's goals. (And at the same time, I suspect that, in another way, he is telling the truth - in that the Illuminati approve of the plans of all three of his contacts, not so much in and of themselves, but rather in that all three of them combined are useful means for the Illuminati to achieve whatever its real ends are.)

Hacker's meetings with Xanatos and Castaway open other doors. In his meeting with Xanatos, Hacker reveals that the Illuminati are responsible for a recent invitation to the White House that he has received, one which they want him to accept. What the purpose of this invitation is, and why the Illuminati want Xanatos to go to Washington, D.C., we do not as yet know, but we should learn the answers (at least, the immediate ones) in future issues.

The meeting between Hacker and Castaway is a delight in another way. One of the major flaws of The Goliath Chronicles was its depiction of the Quarrymen as an organization so blatantly violent that it was hard to believe that it was not already behind bars by the beginning of "Angels in the Night". Here, however, we see a Castaway who, while ruthlessly anti-gargoyle, is still intelligent enough to recognize that he needs to be careful about the image that his followers present to the world. When Hacker walks in on him, he is giving orders that those Quarrymen patrolling the streets on Halloween night leave their hammers at home, so that there will be no danger of any incidents of their mistaking costumed party-goers for gargoyles. Clearly this Castaway is not going to be firing heavy artillery in the city streets - which will make him an even more difficult character to defeat.

Goliath's visit to the Labyrinth to ask Delilah out introduces a third major thread in the issue: the Mutates and Clones. Al (the old man living in the Labyrinth whom we met briefly at the start of "Kingdom") explains to a newcomer, a mysterious - and so far anonymous - young woman about the Mutates' backstory. While this is clearly present largely for the benefit of new readers who hadn't seen the animated series, it contains a few delightful elements of its own. Al, while listing the Mutates, leaves Fang's name out (though we get a background glimpse of him in the corresponding panel), perhaps because of the latter's attempted coup. He also consistently calls Xanatos only "Rich Dude", rather than naming him; to top it off, in the panel introducing Sevarius, we get a wonderful image of the amoral geneticist with his face half-covered by a phial in such a way as to produce a very sinister distortion of his features. It is clear enough, however, that the Clones will have more to do in this story than just supplying Delilah's presence for the "Double Date" story, for at the cliffhanger ending, the Labyrinth receives an unwanted visitor: Thailog has returned!

These are the main elements, but there are a number of other small but highly enjoyable background moments. We get a brief glimpse of Alex in a very adorable-looking gargoyle costume at the start of the issue. Brooklyn is still clearly upset about Angela's choice of Broadway for her mate; when he accompanies Goliath to the Labyrinth, he is attracted to Delilah, but just as he is about to speak to her, Goliath asks her out, to Brooklyn's disappointment. And finally, we get a glimpse of Demona returning to the abandoned St. Damien's Cathedral, to recover a crystal from the remains of the Praying Gargoyle. Whether this act of hers will have significance for the later two parts of this story, or it is simply "laying pipe" for a future story after #5, we do not know as yet - but it will be wonderful to find out.

We first learn the full membership of the Gargoyle Taskforce. Besides Matt Bluestone as its leader, and Margot Yale as its advisor (first introduced in that role in #2), it includes Elisa, Officer Morgan, and Martin Hacker as "federal liaison". It also includes three new characters: Detectives Cedric Harris and Tri Chung, and Officer Phil Travanti. Travanti is not, strictly speaking, a new character so much as an anonymous figure from the television series now being fleshed out: he had appeared as Officer Morgan's partner in "Temptation". (Readers of the comic have eagerly begun to speculate whether Tri Chung may be related to Terry Chung, one of the regulars in the projected New Olympians spin-off. The similarity of their surnames may be a coincidence, but given the interconnected nature of the Gargoyles Universe, we cannot be entirely certain of that.)

Fox's promise to Lexington that there will be no danger from "enchanted jewelry" is most likely an allusion to the Eye of Odin's role in the television series' Halloween episode, "Eye of the Beholder".

The crystal that Demona comes back to St. Damien's Cathedral for is a reference to the aborted episode "The Last", intended to appear in the (also aborted) Team Atlantis series, where the Praying Gargoyle was revealed to be powered by a crystal coming from Atlantis. Demona also got a new armband.[1]

John Castaway's telephone conversation refers to a Quarryman by the name of Chaz. This is the same Chaz who was one of Fang's henchmen in "Kingdom". (According to Greg Weisman, the Quarryman whom Castaway is speaking to directly on the phone is his partner from the same episode, who was left anonymous on screen and in this issue, but whom Greg has named Lou.)

Wardrobe nit: When Al's friend is first introduced on page 15, she has a jacket wrapped around her waist, which appears only intermittently on the following pages (shows up on some panels then disappears on others). The jacket is last seen on page 19, and does not appear again in this comic or in later issues.