From GargWiki
(Redirected from Manhattan clan)
Jump to: navigation, search 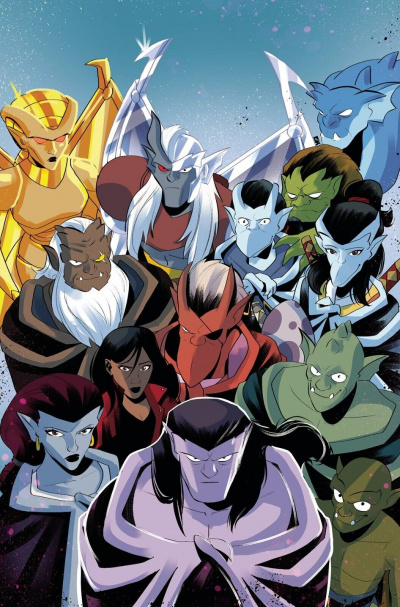 The Manhattan Clan is a gargoyle clan living in Manhattan.

The Manhattan Clan is an offshoot of the original Wyvern Clan. In 1994, approximately one thousand years after the Wyvern Massacre and sleep spell was cast on the surviving gargoyles at Wyvern Hill, David Xanatos bought and transported Castle Wyvern to the top of the Eyrie Building in New York City, thus breaking the spell by raising the castle above the clouds and waking Goliath, the clan's leader, and the four other surviving gargoyles and the single gargoyle beast.

Xanatos later reunited Goliath with Demona, and she and Xanatos tricked Goliath and his clan into committing crimes against Cyberbiotics. Eventually, Demona showed her hatred for humans when Goliath mentioned his human friend, Elisa, causing a rift between the two gargoyles and Demona's official leaving of the clan. ("Awakening")

Elisa ultimately showed Goliath and his clan that Xanatos was their enemy, and was instrumental in landing him in jail. The clan remained at Castle Wyvern for several months, but eventually had to leave for their own safety. Elisa found the clan a new home in the clock tower above her police precinct headquarters. ("Enter Macbeth") The clan would live in the clock tower for more than a year. In February, 1995, while living at the clock tower, the clan took an oath to protect the island of Manhattan and watch over all its inhabitants, human and gargoyle alike. ("Reawakening") It could be said that it was then that the six gargoyles ceased to be just transported survivors of the Wyvern Massacre and the Manhattan Clan was truly founded.

Over the next two years, the clan would discover many enemies. Though Xanatos and Demona were always their primary threats, and they often battled ordinary criminals and street thugs, they also were at odds against the Pack, Tony Dracon, and Thailog. The Mutates and the Clones were originally enemies, and Fang and Brentwood continue to be. However, the others, collectively known as the Labyrinth Clan, are now allies of a sort. Similarly, Macbeth and Vinnie Grigori were enemies of the clan for a time, but are now allies. Other human friends of the clan include Matt Bluestone, Halcyon Renard, Jeffrey Robbins, and Doctor Sato.

The Manhattan Clan is also on very good terms with gargoyles worldwide, including the Mayan Clan, the Ishimura Clan, the London Clan, and especially the Avalon Clan, which is something of a sister clan to the Manhattan gargoyles.

In late 1996, a trio of Hunters came to New York on their quest to kill "The Demon" and all gargoyles. They were drawn there by the numerous gargoyle sightings in the city and soon discovered the existence of the Manhattan Clan. In the ensuing conflict, the Hunters destroyed the clock tower, whereupon the members of the clan were forced to accept an offer from Xanatos to return to live at their ancestral home, Castle Wyvern atop the Eyrie Building, feeling their safety was at risk anywhere else. The clan did not entirely trust Xanatos, but felt that they had few other real options. It was during this time that the Manhattan Clan was revealed to the people of New York and images of them were broadcast around the world. Though the clan had never made any attempt to hide themselves, they also did not purposefully want to reveal themselves either and their secret was exposed against their will. They are the first clan to be widely known of world-wide and thus they are also the first confirmed existence of gargoyles in most people's eyes. ("Hunter's Moon Part Two", "Hunter's Moon Part Three") The clan will continue to reside at the Eyrie Building until at least 2198, when the building will be known as the super-modern Eyrie Pyramid.

Eggs from the Manhattan rookery will be stolen in 2008. How or why is currently unknown. [1]

Eventually, members of this clan will work for the NYPD as official protectors of the city. [2] Other individuals of the Manhattan Clan will be brought into the United Nations by Secretary General Alexander Xanatos to work as peacekeepers. The clan will undoubtedly have a major influence in the United Nations passing the Gargoyle Minority Protection Act.

In 2198, the leader of this clan and all its eggs will be kidnapped from Queen Florence Island by the Space-Spawn alongside all the other gargoyle clan and world leaders. Shortly thereafter, the practice of gargoyles working for the United Nations will cease. Fortunately, Samson, the second-in-command of the clan at this time, will form a resistance movement against the Space-Spawn occupation. [3]

The founding members of the Manhattan Clan in 1994.

When first founded in 1994, all the members of the Manhattan Clan were of Scottish descent and therefore shared the same skin and general wing type, meaning not feathered, and most only having one brow ridge. Chin, elbow, wing-joint, and knee spurs are not very common, and the most common wing-type is a "full wing," where each non-thumb digit sports a membrane. The least common wing-type is the "web-wing," as per Lexington. By 1997, the clan had more than doubled in size and included members of Japanese and Chinese descent, not to mention a young gargoyle of mixed descent, a cyborg gargoyle, a robotic gargoyle and a human. Much like the human population of Manhattan, this clan seems destined to become a "melting pot" of gargoyles around the world and will be very diverse indeed.

Shortly after being awakened in Manhattan, the founding members of the clan chose names for themselves (aside from Goliath who already had been given a name). From that point on, all members have used names. Elisa Maza became an honorary member of the clan within the first year or two of its existence and has been recognized as such by all members due to her loyalty to them. In mid-1996, Angela left her clan on Avalon, and eventually joined her father, Goliath, and his clan in Manhattan. At the beginning of 1997, Coldstone and Coldfire were persuaded by Hudson to rejoin the clan permanently. On that same night, Brooklyn's family, Katana, Nashville, and Fu-Dog, joined the clan upon the conclusion of Brooklyn's forty-year TimeDancer journey. As time goes by, the clan will continue to grow. New members will join the clan and new generations will be hatched. Greg Weisman has said that the 2158 rookery will have many eggs in it, implying a fairly large clan by 2148.

Note: Members are listed in order of biological age as of 1997.

Elisa Maza is considered a member of this clan both by herself and the gargoyles, since at least the episode "The Cage". Angela has stated that she considers Demona to be part of her clan as well, though other clan members dispute this. As of 1996, the Manhattan Clan often refers to the Avalon Clan as "our clan". This is no doubt due to the close genetic and emotional relationship between the two groups. They could be considered "sister clans".

The clan struggled through numerous trials trying to improve their public image such as Goliath agreeing to face an armed robbery indictment in criminal court and Broadway cooperating with Fox on a proactive publicity campaign in Los Angeles. ("And Justice For All", "Broadway Goes to Hollywood")

However, the seminal event that proved most helpful was when the Quarrymen, led by John Castaway himself, attacked a passenger train that was carrying Angela and Bronx as prisoners. The remainder of the Clan, who were supposedly dead at Castaway's hands, arrived to stop the thugs and an all out battle ensued. Eventually, Castaway, raving his insane hatred in the locomotive car in front of human witnesses, attempted to make the train crash to kill all the passengers, human and gargoyle alike. Goliath overpowered the lunatic and the Clan managed to bring the train safely to a stop.

As a result, the rescued passengers thronged the clan in gratitude. Even DA Margot Yale, who was previously outspoken on her hate for Gargoyles, dropped her charges against them and publicly praised their character. Goliath marked this event as a beginning of a new era where humanity now acknowledges the intelligence and heroism of his people. ("Angels in the Night")

Shortly after the events of "Phoenix", the Manhattan Clan crossed paths with Zafiro and Obsidiana as well as the Spider-Man and battled Demona (alongside the Vulture, Electro, Dr. Octopus, Kraven the Hunter and even Homunculi), who's latest plan against humanity is the combined powers of the Spear of Destiny and the Crown of Thorns. ("Religious Studies 101: A Handful of Thorns") Later on, the clan confronted Demona once more, in addition to the secret organization known as the Light while trying to prevent the abduction of Egwardo, the clan's sole gargoyle egg. During this time, Spider-Man recommended the Manhattan Clan to the Justice League's covert-ops Team, of which Angela, Broadway, and Lexington ultimately join (Nashville also expressed interest in joining one day). Batman also offered membership for Goliath to join the Justice League, but is interrupted by Iron Man's trying to invite Goliath to join the Avengers. ("Recruits")